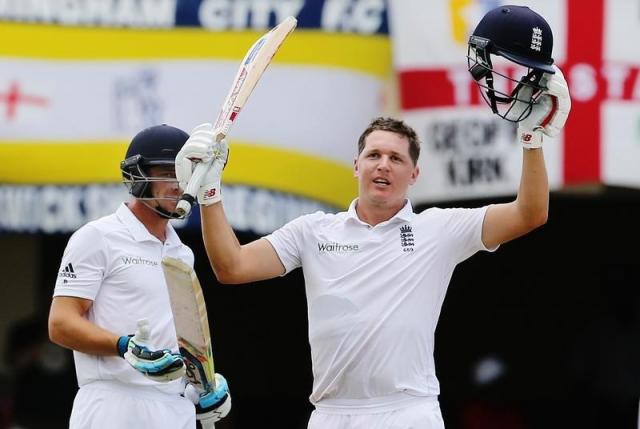 ANTIGUA - Gary Ballance's fourth test century made up for his miserable World Cup as he spearheaded England's victory bid on the fourth day of the first test against West Indies in Antigua on Thursday. The tourists set West Indies an improbable target of 438 to win by declaring on 333 for seven and the hosts were 98 for two at the close, having lost Darren Bravo for 32 to a stunning catch by Chris Jordan and Kraigg Brathwaite for five. Opener Devon Smith finished unbeaten on 59, his sixth test half-century, while Marlon Samuels was two not out. Ballance shrugged aside a disappointing 50-over World Cup in Australia and New Zealand earlier this year and a first-innings failure in Antigua by compiling a painstaking 122 in 250 balls. The left-hander fist-pumped the air in delight and waved his bat to the crowd after going to three figures with a straight four off spinner Sulieman Benn. Ballance almost seemed incapable of hitting the ball off the square as he and his team struggled at the World Cup but, after a slow and hesitant start, he grew in confidence in England's second innings in Antigua. He was given good support by Jos Buttler (59 not out), Joe Root (59) and Ben Stokes (35) as the tourists made the West Indian bowlers toil. EARLY BLOW Captain Alastair Cook declared when Bravo took a steepling catch on the mid-wicket boundary to remove Jordan for 13. England bowler Stuart Broad then struck an early blow as Brathwaite fended a hostile bouncer straight to Root at short leg on five. Broad also hit Bravo on the point of his shoulder with another bumper before tea but that was one of few alarms for West Indies until Jordan pulled off his spectacular catch. Bravo looked in complete control until he chased a wide delivery from Root and edged to first slip where Jordan dived full-length to his right to pluck the ball out of the air. Part-time spinner Root celebrated in style by running and leaping around the outfield. However, on a docile pitch still good for batting, England will need to combine hard work and patience on the final day to get the eight wickets they need to go one up in the three-match series. James Anderson finished the day one victim shy of Ian Botham's record haul of 383 England test wickets. - REUTERS