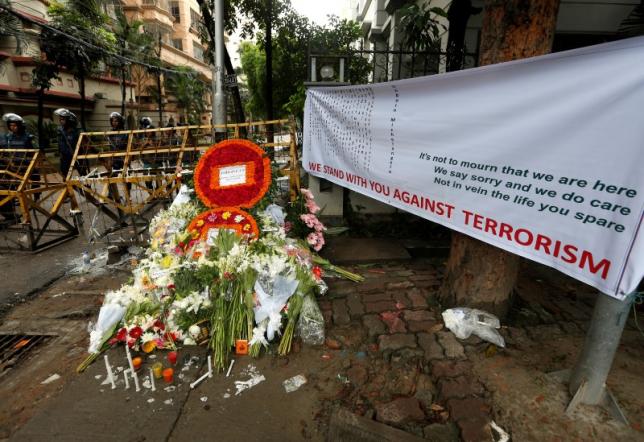 DHAKA - Police in Bangladesh arrested on Sunday four female members of a home-grown militant group blamed for a bloody attack on a cafe in which 22 people were killed, most of them foreigners, an officer said. Authorities have intensified a hunt for militants after five young men stormed the upmarket restaurant popular with foreigners on July 1. Among those killed were nine Italians, seven Japanese, an American and an Indian. The five militants were gunned down when security forces moved in. Police believe that Jamaat-ul-Mujahideen Bangladesh (JMB), a banned group that has pledged allegiance to Islamic State, played a significant role in organizing the group of privileged, educated young men who carried out the attack. The four women members of the group, aged 18 to 30, who were arrested in from the northwestern district of Sirajganj, were believed to have been plotting an attack, police said. "Acting on a tip-off, our force raided a rented house where a large amount of grenade-making materials, crude bombs and jihadi books were also found," district police superintendent Siraj Uddin Ahmed told reporters. The women would be interrogated to determine if they had any link to the Dhaka cafe attack, he said. On Thursday, four other members of the banned group, including a regional head, were arrested. The cafe attack was one of the worst militant attacks ever in Bangladesh. Al Qaeda and Islamic State have made competing claims for a series of killings of liberals and members of religious minorities in the country over the past year. The government dismissed the claims and instead blamed domestic militant groups, but security experts say the scale and sophistication of the cafe assault suggested links to a trans-national network. -Reuters