DHAKA (92 News) - Bangladesh beat Pakistan by 79 runs in their first ODI at the Sher-e-Bangla National Stadium, Mirpur on Friday. The win was Bangladesh's second against Pakistan, and their first since the 1999 World Cup. Tamim Iqbal and Mushfiqur Rahim helped Bangladesh set up a big total of 329. Tamim’s 132 off 135 balls included 15 boundaries and 3 sixes while Mushfiqur Rahim’s 106 came off 77 balls with 13 boundaries and 2 sixes. Pakistan’s Wahab Riaz with his impressive spells grabbed four wickets while Rahat Ali chipped in with one scalp. However, making a comeback in the side, Saeed Ajmal was not able to impress and proved most expensive with giving away 74 runs in his allotted 10 overs. In reply to Bangladesh’s total, Pakistan team fell 250 all out in 45.2 overs. The only half-centuries came from captain Azhar Ali (72), Haris Sohail (51) and Mohammad Rizwan (67). Taskin Ahmed and Arafat Sunny were the main contributors for Bangladesh to go through Pakistani batting lineup and bagged three wickets, each. Shakib Al Hasan and Rubel Hossain also picked one wicket, each. Mushfiqur Rahim was declared Man of the Match. The second match will be played at the same venue on Sunday. 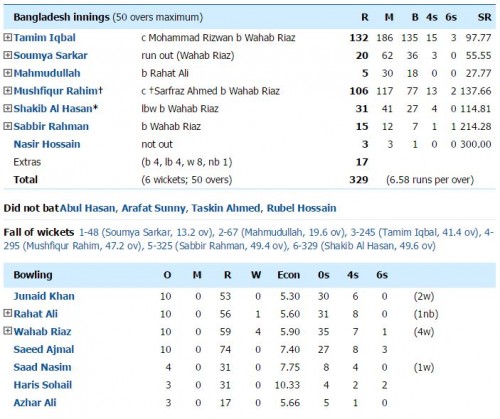 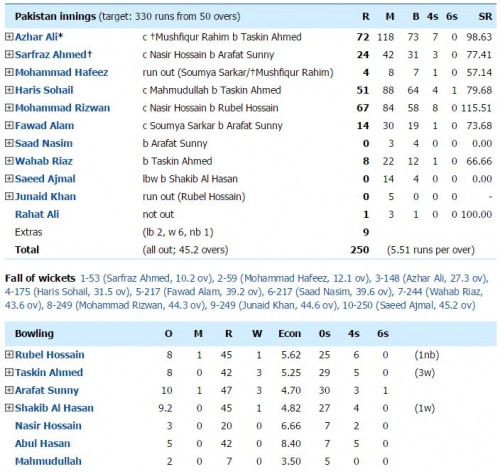