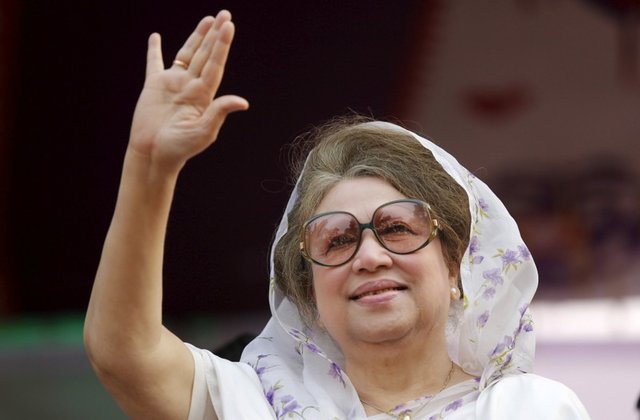 DHAKA (Reuters) - A Bangladesh court on Tuesday doubled to 10 years a jail term for former prime minister Khaleda Zia for graft, ruling out her chances of contesting a general election in December, lawyers said. Khaleda’s opposition Bangladesh Nationalist Party (BNP) has been in disarray after she was jailed in February, following a verdict it says aimed at keeping the 73-year-old leader and her family out of politics. “Now, there’s no chance for the BNP chief to contest the next election,” Khurshid Alam Khan, a lawyer for the government, told reporters after Tuesday’s High Court decision. Khaleda, who has been receiving treatment in hospital this month for arthritis and diabetes, did not appear in court, and was not represented by a lawyer. Zainul Abedin, a lawyer for the former prime minister, said he would comment later on Tuesday, following consultations. In February, Khaleda, her son and aides were convicted of stealing 21 million taka ($253,000) in foreign donations for an orphanage trust set up when she was last prime minister, from 2001 to 2006. Khaleda has denied any wrongdoing. Earlier, a court sentenced her to seven years in prison for misappropriation of 31.5 million taka ($371,550) from a trust in 2005. The BNP has rejected that judgment as “state-sponsored”, and is staging a nationwide protest against it on Tuesday. It has urged the government to free Khaleda and called for a neutral caretaker government to be put in place before December’s vote. A court this month sentenced Khaleda’s son, the party’s acting chief, Tarique Rahman, who lives in exile in London, to life in jail over a plot to assassinate Prime Minister Sheikh Hasina in 2004. The party has dismissed that accusation as part of a ploy aimed at keeping the family out of politics. Last month, Khaleda said there was “no justice” as she appeared before a makeshift court set up in the prison to fast-track her trial. Khaleda and Hasina, both related to former national leaders, have dominated politics in poverty-stricken Bangladesh for more than two decades, nursing a long and bitter rivalry.