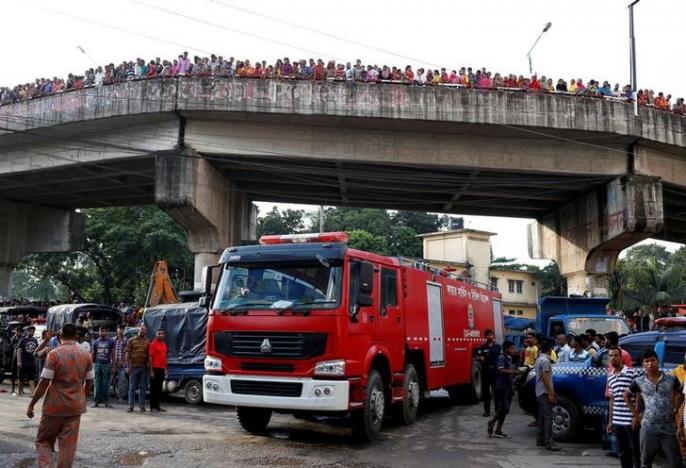 DHAKA - A fire at a food and cigarette packaging factory in Bangladesh that killed at least 24 people and injured more than two dozen others on Saturday, spread into the storage area of the building through the night, according to emergency officials. "We could not start search operations as it took until late into yesterday night to control the fire in the building," Ajit Kumar Bhoumik, a senior official of the fire service said early on Sunday. "At night the fire spread to other floors where huge amounts of chemicals and other flammable items were stored for use in packaging," Bhoumik told Reuters from the site by phone. Fire officials said late on Saturday they had been unable to enter the building and search through the debris, amid fears that the death toll could rise further. The cause of the fire in the Tongi industrial zone about 20 km (12 miles) north of the capital, Dhaka, was not immediately known, but officials said a boiler explosion probably triggered the blaze. It happened as workers prepared to swap shifts in the morning. The fire is the latest in a series of industrial accidents in the South Asian country, which is the world's No. 2 garment exporter behind China. It is also the worst industrial accident in Bangladesh since the 2013 collapse of the Rana Plaza building outside Dhaka that killed over 1,100 workers, who were mainly employed in the garment industry. The blaze on Saturday at Tampaco Foils, caused the partial collapse of the factory building, which packages various items, including food and cigarettes, for several local companies and global brands, such as British American Tobacco and Nestle. -Reuters