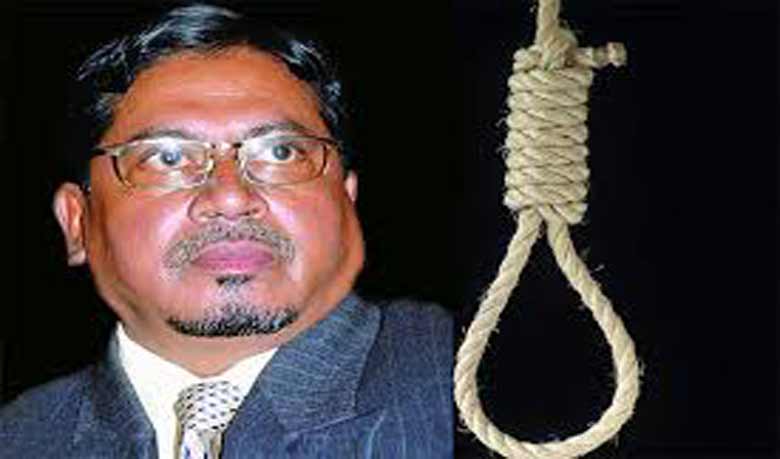 DHAKA - Bangladesh hanged Jamaat-e-Islami opposition leader Muhammad Kamaruzzaman on Saturday for war crimes committed during the 1971 war of independence from Pakistan, a move met with an angry reaction from his supporters who called for a protest strike. Kamaruzzaman, 63, of the Jamaat-e-Islami party, was hanged at Dhaka Central Jail after the Supreme Court rejected his appeal against a death sentence imposed by a special tribunal for genocide and torture of civilians during the war. He refused to beg for a pardon from the president. The head of the jail confirmed that the execution took place at 10:30 p.m. (1630 GMT). The acting head of Jamaat-e-Islami, Maqbul Ahmed, said in a statement: "The government, in a very planned way, killed him in political revenge." The party declared Sunday as a "prayer day" for Kamaruzzaman and peace and called for a general strike on Monday. The Border Guard Bangladesh paramilitary force was deployed across the country to stem any sign of protest. All roads leading to the prison were closed on Saturday and security forces patrolled the capital. Supporters of the sentence were soon out hailing the execution. Across the country, there were several marches calling for the completion of other war crimes cases. Demonstrators offered sweetmeats to each other to welcome the execution. Prime Minister Sheikh Hasina opened an inquiry in 2010 into crimes committed during the war, paving the way for prosecutions by two war crimes tribunals that Islamists have denounced as part of a politically motivated campaign against Jamaat-e-Islami. International human rights groups say the tribunal's procedures fall short of international standards, an accusation the government denies. In a statement the U.S. State Department said further improvements needed to be made in the judicial process in Bangladesh and until then "it is best not to proceed with executions given the irreversibility of a sentence of death." The European Union, United Nations and human rights groups last week urged Bangladesh not to impose the death penalty. Senior Jamaat-e-Islami official Abdul Quader Molla was hanged for war crimes in December 2013 after the Supreme Court overturned a life sentence imposed by the tribunal. Eight others have been sentenced to death for their actions in the 1971 war of independence from Pakistan. More than 200 people were killed in protests against the cases in 2013, including Islamist party activists and members of the security forces. The territory of East Pakistan broke away to become independent Bangladesh in 1971 after a war between Bangladeshi nationalists, backed by India, and Pakistani forces. About three million people were killed in the conflict. Some factions in Bangladesh, including Jamaat-e-Islami, opposed the break with Pakistan. The party denies accusations that its leaders committed murder, rape and torture. - Reuters