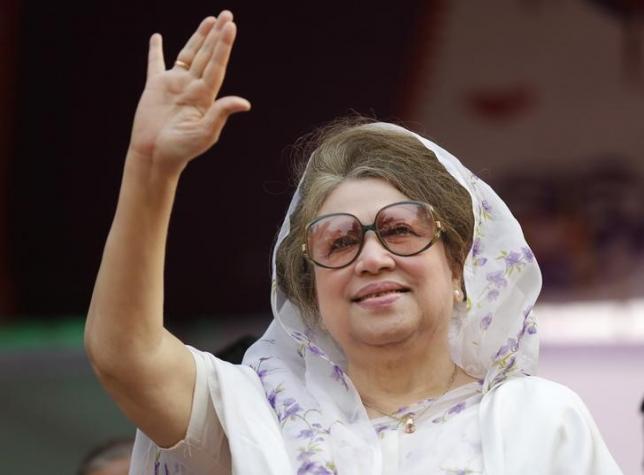 DHAKA - Bangladesh’s former premier and main opposition leader Khaleda Zia was granted bail in two graft cases on Sunday after she appeared before a special court, a potential sign of easing tension in the politically unstable South Asian country. Zia appeared amid tight security before a special anti-graft court in the capital, Dhaka, to request bail more than a month after warrants for her arrest were issued, her lawyers said. Zia's Bangladesh Nationalist Party (BNP) has intensified protests this year in a bid to force Prime Minister Sheikh Hasina to step down and hold a new vote under a neutral caretaker administration after a disputed 2014 poll. The BNP refused to take part in the 2014 general election, saying it was rigged. Zia’s lawyer, Sanaullah Miah, told reporters she had been unable to appear for previous court hearings "for health and security reasons". Her next court appearance was set for May 5. The 69-year-old former leader has been staying in her office in Dhaka’s diplomatic enclave since she was prevented from holding a mass rally on Jan. 5, the first anniversary of the disputed election. Zia waved to dozens of chanting supporters as she left the court to return to her home. The court's decision to grant her bail could be a sign of easing tension. More than 120 people have been killed and hundreds injured in political violence, most in petrol bomb attacks on vehicles, amid transport blockades and strikes by the opposition aimed at toppling the government. Zia is accused of embezzling $650,000 in two corruption cases involving charitable funds during her last term as prime minister, from 2001 to 2006. She and leaders of her party have denied the charges, saying they are politically motivated. She is also facing charges of instigating the violence. Bangladeshi politics have been mired for years in rivalry between Hasina and Zia. Both women are related to former national leaders, and they have alternated as prime minister for most of the past two decades. - Reuters