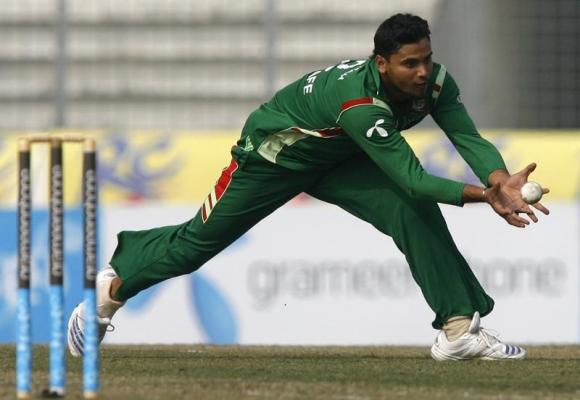 HAMILTON - Bangladesh captain Mashrafe Mortaza, who masterminded the team's cricket World Cup Pool A win over England, could skip Friday's match against New Zealand after the team were fined for aslow over rate. Mortaza forfeited 40 percent of his match fee after Bangladesh were ruled to be two overs short when the time allotted to complete their 50 overs had expired against England on Monday. The victory ensured Bangladesh advanced to the quarter-finals while England were eliminated. The Bangladesh captain, who is also suffering from a sore throat, takes extra time to complete his overs because of knee braces he wears after seven operations. If Bangladesh infringe again in Friday's match Mortaza would be banned for the quarter-final, which is likely to be against India, and the team management may decide not to take the risk. If Mortaza does not play all-rounder Shakib Al Hasan will lead the team. Bangladesh bowling coach Ruwan Kalpage suggested this week that the team could use their spinners early in the New Zealand innings against Brendon McCullum, who has the highest strike rate in the tournament. The New Zealand captain has been given licence to attack from the opening ball as part of a team policy which emphasises aggression in all facets of the game. On Thursday coach Chandika Hathurusinghe said it was difficult to bowl against McCullum because he was playing without fear. "But again we play to our strength and we have a few game plans that, if we execute like the plans that we have, it's key to win this game. He's one of the key players we need to get out early," he told a news conference. However Hathurusinghe also said the Seddon Park pitch was harder and featured more grass than the Adelaide track, which would mean less help for the spin bowlers. Steady rain fell on Thursday and there were pools of water on the covers which will also help the New Zealand pace bowlers. The forecast is for fine weather on Friday with the chance of a shower. Fast bowler Adam Milne has been suffering from a sore shoulder which has restricted him at practice this week and New Zealand will decide on Friday morning whether or not they will make their first team change during an unbeaten run in the tournament. Mitchell McClenaghan would be the obvious replacement although McCullum said the veteran Kyle Mills would also be an option. Asked if New Zealand would err on the side of caution in making a decision on Milne with the knockout stages starting next week, McCullum replied: "I think it's fair to assume that." –Reuters