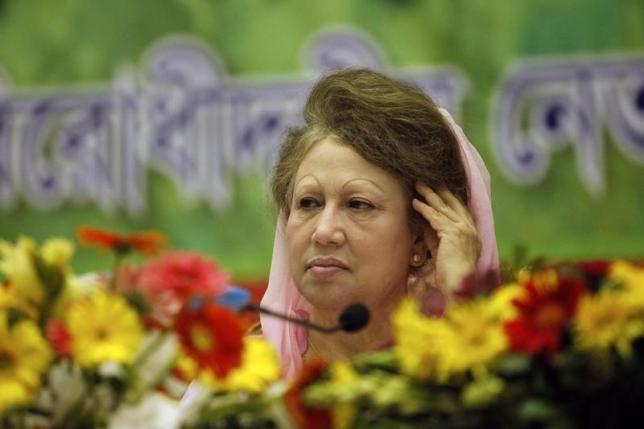 DHAKA - Assailants wielding iron rods attacked the car of Bangladesh's former prime minister and main opposition leader Khaleda Zia on Monday during an election rally and then shot at it as the vehicle sped away but she was unhurt, officials said. The attack highlighted tensions in the politically unstable South Asian country, where Khaleda's Bangladesh Nationalist Party (BNP) has stepped up protests aimed at forcing Prime Minister Sheikh Hasina to quit and hold a new national election following a disputed 2014 poll. BNP spokesman Mohammad Shamsuddin told Reuters Khaleda had been addressing a rally for a mayoral election in the capital Dhaka from her car when the men tried to attack it with iron rods and sticks. Shots were fired at the bullet-proof vehicle as it drove off, Shamsuddin said. Khaleda's bodyguard and five other people were injured in the attack and had to receive hospital treatment, he added. The BNP called for a nationwide general strike outside Dhaka and the city of Chittagong - which both hold mayoral elections on April 28 - to protest against the attack on its leader. The prime minister's political adviser, H.T. Imam, said Khaleda's party should take better security precautions in crowded urban areas because many Bangladeshis were angry with her over the protests organized by her party. More than 120 people have been killed and hundreds injured in months of political violence, most of them in petrol bomb attacks on vehicles, amid transport blockades and strikes by the opposition aimed at toppling the government. POLITICAL RIVALRY The BNP refused to take part in last year's general election, saying it was rigged. Hasina has refused the BNP demands that she step down, instead tightening her grip by arresting key opposition leaders and clamping down on media critical of her government. Bangladeshi politics has been mired for years in rivalry between Hasina and Khaleda. Both women are related to former national leaders and they have alternated as prime minister for most of the past two decades. Khaleda, 69, is facing charges of instigating the violence, which is estimated to have cost Bangladesh the equivalent of 0.55 percent of its national output. Earlier this month Khaleda was granted bail in two graft cases she is fighting. She denies any wrongdoing and says the charges against her and the BNP are politically motivated. - Reuters