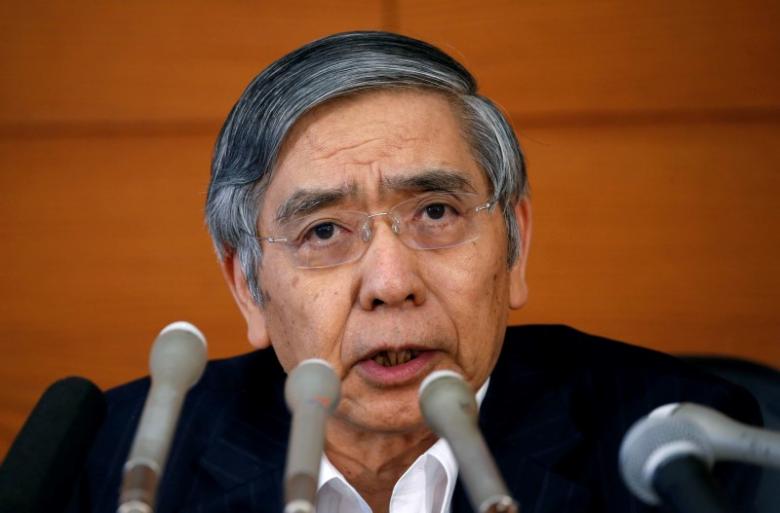 TOKYO - Bank of Japan Governor Haruhiko Kuroda signalled his readiness to ease monetary policy further using existing or new tools, shrugging off growing market concerns that the bank is reaching its limits after an already massive stimulus programme. He also stressed the BOJ's comprehensive assessment of its policies later this month won't lead to a withdrawal of easing. But Kuroda acknowledged that the BOJ's negative interest rate policy may impair financial intermediation and hurt public confidence in Japan's banking system, a sign the central bank is becoming more mindful of the rising cost of its stimulus. "Even within the current framework, there is ample room for further monetary easing ... and other new ideas should not be off the table," Kuroda told a seminar on Monday. "There may be a situation where drastic measures are warranted even though they could entail costs," he said, adding that the BOJ should "always prepare policy options." Under its current framework that combines negative rates with hefty buying of government bonds and some riskier assets, the BOJ has gobbled up a third of Japan's bond market and faced criticism from banks for squeezing already thin profit margins. Sources have told Reuters the BOJ will consider making some modifications to its policy framework and debate some of the unintended consequences of its ultra-loose policy. For the first time, Kuroda publicly acknowledged that negative rates could dampen public sentiment by hurting banks' profits and the rate of returns on pension investments. But he said monetary policy has yet to reach its limit, stressing that the BOJ had room to deepen negative rates. "There is no free lunch for any policy. That said, we should not hesitate to go ahead with (additional easing) as long as it is necessary for Japan's economy as a whole." The BOJ eased policy in July and pledged to conduct a comprehensive assessment of the effects of its stimulus programme at this month's rate review. Most analysts expect the BOJ to ease further this month, with economic growth having ground to a halt and inflation sliding further away from its 2 percent target. "Kuroda's message is that the BOJ would at least keep the option of deepening negative rates in case the yen spikes suddenly. But that doesn't mean it would take such a step anytime soon given concerns about the costs," said Yasunari Ueno, chief market economist at Mizuho Securities. "As for the next step, I expect the BOJ to ease either by cutting rates or boosting quantitative easing, or a combination of both." Facing stubbornly weak prices, the BOJ has pushed back the timing of its inflation goal several times since it implemented aggressive policy easing measures in 2013 under Kuroda. -Reuters