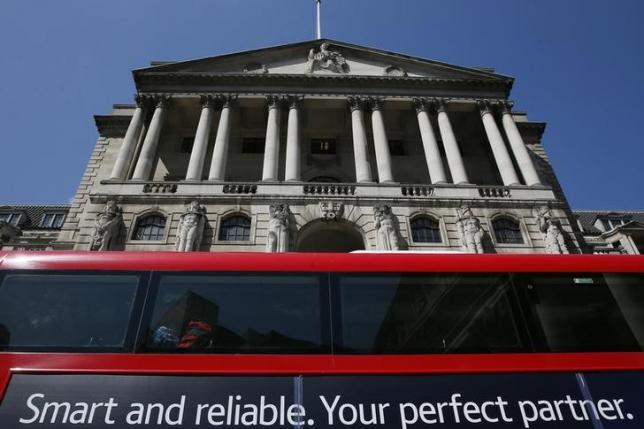 LONDON - The Bank of England is likely to say on Thursday that its policymakers have split over interest rates, adding to expectations that the central bank is heading for its first increase in borrowing costs in nearly a decade. Despite inflation sitting at zero, at least two of the Bank's nine rate-setters are expected to have decided that it is time to start weaning the British economy off record-low rates after two years of strong growth. Divisions among BoE policymakers are common. Two of them voted for rate hikes for much of the second half of last year before oil prices tumbled. But if there is a larger-than-expected split, it could complicate the message from the Bank's governor, Mark Carney, who has sounded less urgent about the timing of a rate increase. It could also push up further the value of sterling which on Wednesday hit its highest level against a basket of currencies in more than seven years, potentially making it harder for the BoE to press ahead with higher rates. The Bank will release a slew of information at 1100 GMT (12:00 p.m. BST), combining several major policy announcements that were previously made separately. All 48 economists taking part in a Reuters poll said the BoE would keep interest rates unchanged at 0.5 percent. But the poll also assessed that two, and possibly three, of the nine members of the Monetary Policy Committee probably voted for a rate hike after wages started to rise more quickly recently and the crisis in Greece eased. At the same time on Thursday, the BoE will publish new projections for Britain's economy which investors will use to gauge the Bank's readiness to raise rates. "Having everything at once (means) everyone is going to have a hell of a struggle on Thursday," Charles Goodhart, a former MPC member, said, speaking at an economic policy forum on Tuesday. Investors will have to decide quickly if a split, and any signs that the dissent might grow in coming months, are balanced by a lower two-year outlook for inflation after a recent strengthening of sterling which will make imports cheaper. And if the Bank sounds more optimistic that Britain's productivity record is at last strengthening, it would be taken as a sign that faster recent pay growth is seen as a less potent inflation threat. Carney has a chance to give his interpretation of the deluge of information when he holds a news conference at 1145 GMT. He said last month that a decision on when to start raising rates will come into sharper relief around the end of the year, leaving open the possibility of a move in November or February, when the BoE publishes its next quarterly economic forecasts. Most economists expect a rate hike in February. -Reuters