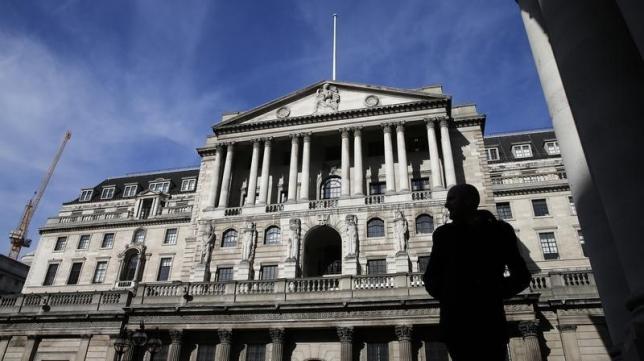 LONDON - The Bank of England pointed to a possible rise in interest rates early next year as just one of its top policymakers backed an immediate move and it said the strength of sterling meant inflation would only pick up slowly. The pound fell sharply and investors briefly pushed back their bets on a first rate hike until June next year, before BoE Governor Mark Carney said the Bank was getting closer to beginning to undo its stimulus for Britain's economy. "The likely timing of the first Bank Rate increase is drawing closer," he told reporters. "However the exact timing of the first move cannot be predicted in advance ... in short, it will be data-dependent," he said after the BoE for the first time published its quarterly economic forecasts and details of its latest policy discussions on the same day. The BoE slashed interest rates to 0.5 percent in the depths of the financial crisis in 2009 and has kept them there since. With the economy now recovering strongly and wages finally rising more quickly, speculation is growing about when it might start to wean Britain off low rates, mirroring the debate at the U.S. Federal Reserve. Carney warned investors that they might be too relaxed about the path, or 'curve', that they are predicting for rates. He pointed out that the Bank was forecasting that inflation would start to overshoot its 2 percent target in just over two years' time, based on predictions in the market for a first BoE rate hike in the second quarter of next year. "The market curve does not deliver a sustainable return of inflation to target, because there is an overshoot," he said. In an interview with the Mirror newspaper, Carney declined to say there was now no chance of a rate hike in 2015. "I would be crazy to rule anything out or to rule anything in," he said. Three weeks ago, Carney said the decision when to hike interest rates would likely come into "sharper relief" around the end of the year. He emphasised on Thursday that this was his own view and that it had not changed. Several economists said they continued to predict a rise in the first three months of 2016. VOTE SURPRISE Investors were taken by surprise earlier on Thursday when the Bank said just one of its nine policymakers -- Ian McCafferty -- had voted for a rate hike at their August meeting, which ended on Wednesday. Most economists in a Reuters poll had expected two or even three members of the Monetary Policy Committee to vote for a rate hike. The 8-1 result prompted markets to push out their bets on a first rate hike into mid-2016. McCafferty, a non-staff member of the MPC, backed rate hikes last year along with his colleague Martin Weale. They both rejoined the fold in January as oil prices tumbled. As Carney spoke on Thursday, the bets on a June 2016 rate hike were quickly reined back in. Jason Simpson, a Societe Generale rate strategist, said: "The message is clear: rates need to rise. Not yet, but they need to go up and every inflation report is one step closer to that." Few economists think the BoE is likely to move before the Federal Reserve, which is expected to raise rates this year, in large part because it would further push up the value of sterling. On Wednesday the pound hit its highest level against a basket of currencies in more than seven years. FOCUS ON STERLING The Bank stressed how a recent strengthening of the pound and a renewed fall in oil prices would push down inflation until at least the middle of next year and said the impact of the rise in sterling could persist even longer. Carney made it clear, however, that a strong currency was no replacement for eventual rate hikes. In a sign of how the debate on the MPC may develop, some of its members saw a risk that inflation could pick up more strongly than the central forecast, the BoE said. But the Bank's array of forecasts and policy debate details suggested it was largely focused on how the stronger pound could keep a lid on inflation. The BoE also noted that Britain's weak productivity growth was finally on the rise, which would help mute inflation even after wages grew surprisingly strongly in recent months. -Reuters