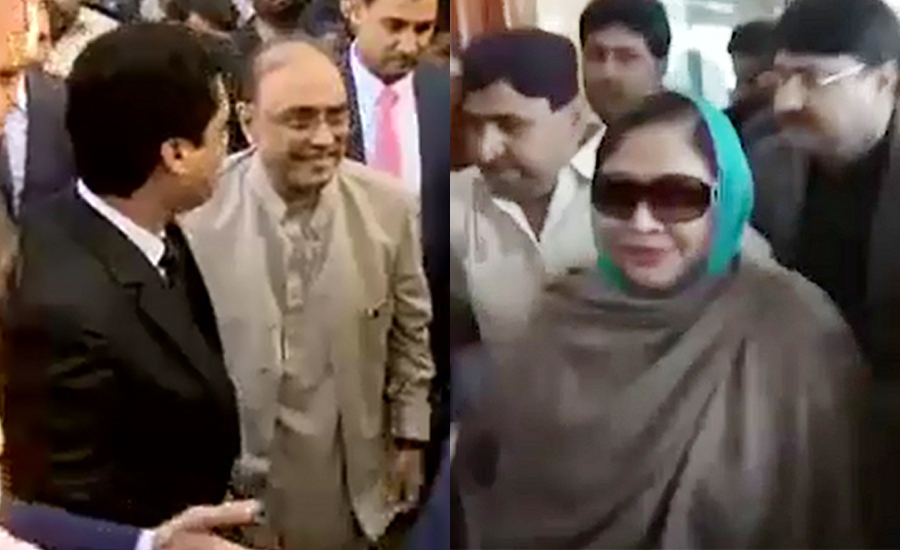 KARACHI (92 News) – The banking court extended the bail of PPP co-chairman Asif Ali Zardari and Faryal Talpur in the mega money laundering case till February 6. The plea for bail of Anwar Majeed and Abdul Ghani will be heard on Feb 6. The FIA prosecutor appealed to the court not to take action on the plea as the matter is being sent to the NAB. Asif Ali Zardari and Faryal Talpur reached the banking court to seek extension in their bail. Other accused, including Abdul Ghani Majeed and Hussain Lawai, also appeared in court. The accused’s counsel appealed to the court to order the FIA to submit the final challan. However, the court refused to take action without the order of the Supreme Court. The court had earlier extended their pre-arrest bail till January 23. SC issues notices to Asif Zardari, Malik Riaz in fake accounts case During the last hearing, the Federal Investigation Agency (FIA) had informed the court that a joint investigation team (JIT) probing the case had submitted its report in the Supreme Court and a decision was yet to be made. However, Zardari's counsel Farooq H Naek had pointed out that till a final challan is not submitted there can be no headway in the case. The FIA has not yet submitted a final challan in the case in the court. Fake accounts case: JIT submits final report to SC Lahore Registry Money laundering case: The FIA is investigating 32 people in relation to money laundering from fictitious accounts, including Zardari and Talpur. Zardari’s close aide Hussain Lawai was arrested in July in connection with the probe. The former president’s other close aide and Omni Group chairman Anwar Majeed a close aide and Omni Group chairman and his son, Abdul Ghani, were arrested by FIA in August. Over 20 ‘benami’ accounts at some private banks were opened in 2013, 2014 and 2015 from where transactions worth billions of rupees were made, according to sources. The amount, according to FIA sources, is said to be black money gathered from various kickbacks, commissions and bribes.