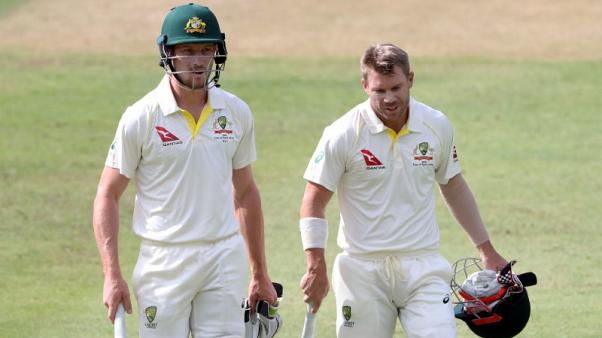 MELBOURNE (Reuters) - Australian batsmen David Warner and Cameron Bancroft have signed up for a limited overs tournament in Northern Territory in July as they look to return to cricket in the wake of the ball-tampering scandal which saw them banned from the national team. Former Australia vice captain Warner was confirmed for two one-day matches on July 21-22, while Bancroft would be available for the whole tournament, NT Cricket said in a statement. “We’re delighted that Cameron and David will be joining us in Darwin for the Strike League,” NT Cricket CEO Joel Morrison said. “Their presence and experience will be invaluable for our local players, and it’s a big endorsement for the fantastic work being done by the staff at NT Cricket to make Darwin the winter destination of choice for Australian cricket.” Along with former Australia captain Steve Smith, Warner is serving a year-long ban, while his former Test opening partner Bancroft is serving nine months for his part in the Cape Town scandal which sullied the national team’s reputation and caused a major sponsor to withdraw support. The bans issued by Cricket Australia preclude the trio from playing at international and state levels, along with the domestic ‘Big Bash’ Twenty20 tournament, but they are allowed to play in local third-tier club competitions and T20 tournaments overseas. “I’m really looking forward to playing in the Strike League in July,” Warner said in the statement. “I heard so much about the competition while I was in Darwin earlier this month that I’m keen to be part of it.” Smith confirmed last week that he would return to cricket at a Twenty20 competition in Canada, which starts in late June. Warner, who has already committed to playing for Sydney club side Randwick Petersham at the start of their season, is also expected to sign as a marquee player in the Canada tournament. Bancroft is confirmed to play with his Western Australian club side Willetton later in the year. Tim Paine will lead Australia during their limited overs tour in England starting next month, their first international cricket since the tampering scandal in South Africa.