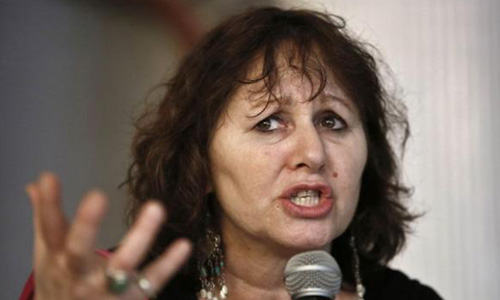 LONDON - India committed "international suicide" by banning a documentary about the gang rape and murder of a woman in Delhi, the director of the film said after a Friday night screening in London. India last week prohibited the release of the film "India's Daughter" and also asked video-sharing website YouTube to remove all links to the documentary. Police said the ban was imposed as comments in the film by one of those convicted of the crime created an atmosphere of "fear and tension" and risked fuelling public anger. "My whole purpose was to give a gift of gratitude to India, to actually praise India, to single India out as a country that was exemplary in its response to this rape, as a country where one could actually see change beginning," said Leslee Udwin, director of the documentary, during a panel discussion. "The supreme irony is that they are now accusing me of having wanted to point fingers at India, defame India, and it is they who have committed international suicide by banning this film." The British filmmaker said she was inspired to make the film after watching thousands of people take to the streets across India to protest the December 2012 rape and murder of a young physiotherapy student on a bus. India toughened its anti-rape laws in response to the outcry following the fatal attack but a rape is still reported on average every 21 minutes in India, and acid attacks, domestic violence and molestation are common. "India's daughter" features an interview with Mukesh Singh, one of four men sentenced to death for the rape, torture and murder of a 23-year-old woman on a moving bus. In the film Singh blames the victim for the crime and resisting rape. Singh's comments grabbed headlines in Indian newspapers and sparked outrage on social media. Some people have questioned whether the convicts should have been given a forum to express their views. Udwin said that banning the film brought India into disrepute by obstructing free speech, one of the essential elements of democracy. The filmmaker said that if she was given a chance she would persuade India's Prime Minister Narendra Modi to allow the screening. "If (Modi) spent one hour seeing this documentary, he would see his own statements since he got into power reflected in this film. The film is saying exactly what he's saying with his 'Beti Bachao' campaign," said Udwin, adding that she was still in shock about the ban. Launched in January, the "Beti Bachao Beti Padhao" (Save the Daughter, Teach the Daughter) campaign is aimed at improving India's child sex ratio, which skews toward boys due to sex-selective abortions, and gender equality through access to education. Udwin said she was hopeful the film would eventually be screened in India and appealed to Modi to "be a hero globally" and stand up to his statements promoting gender equality.