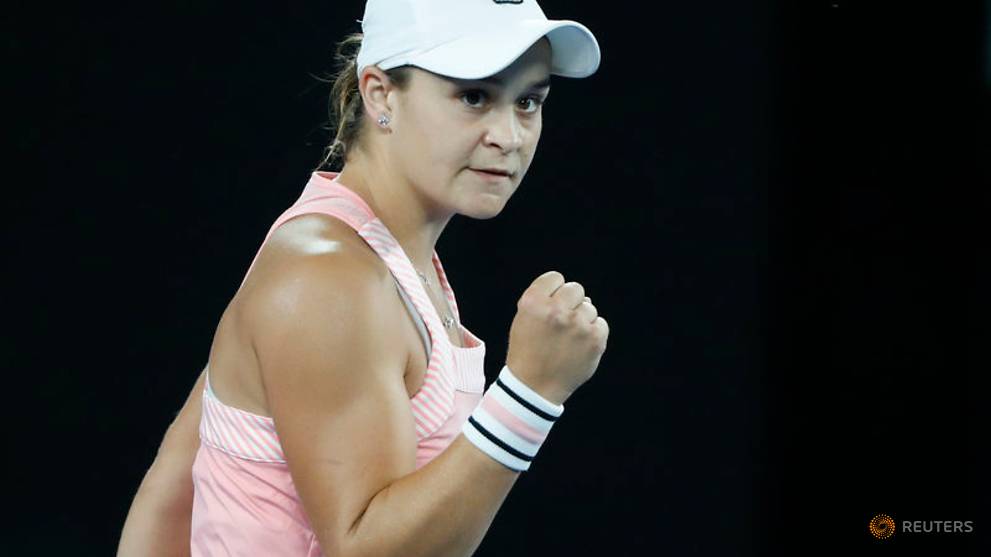 MELBOURNE (Reuters) - Ashleigh Barty eased past Greek Maria Sakkari 7-5 6-1 to advance to the fourth round of the Australian Open on Friday, keeping alive local hopes of a home women’s champion.
Australians have had limited success in the tournament despite boasting several Grand Slam singles champions like Samantha Stosur, Lleyton Hewitt and Pat Rafter since the 1990s. No Australian man or woman has won the singles title at their home Grand Slam since the 1970s. The last women’s finalist was Wendy Turnbull in 1980, while Hewitt lost the 2005 final to Russia’s Marat Safin. The 15th-seeded Barty arrived in Melbourne after a final appearance at the Sydney international, where she also beat world number one Simona Halep, and has looked untroubled in the year’s first Grand Slam. The 22-year-old has looked in control and was yet to lose a set in the ongoing tournament. Under a closed roof at the Rod Laver Arena due to morning showers, Barty broke Sakkari twice in each set to seal the win in an hour and 22 minutes. Barty, who has also played elite-level cricket, served 13 aces without a double-fault and matched her best Grand Slam showing after reaching the last 16 stage at the 2018 US Open. “You have to keep giving yourself the opportunity to do better and better,” she told reporters. “It’s all trusting in the process and the work that my team and myself has done in the preseason, and throughout the last 18 months, two years. “We’re continuing to chip away every single day and get better as a person and as a player every single day and continue to develop my game. “It’s getting to the point now where I’m feeling more and more comfortable on the court and can play my brand of tennis, which when I execute I know it works against the best in the world.” Melbourne is home to the largest population of Greeks outside their country and they turned out in large numbers, singing and chanting for Sakkari throughout the match. World number 43 Sakkari, who has now reached the third round at all four Grand Slams, started aggressively but could not match Barty’s consistency or shotmaking with the Australian hitting 24 winners against nine from her opponent. Barty, who took a cautionary medical timeout at the end of the first set, will come up against a former world number one in the next round as she awaits the winner of the third round clash between holder Caroline Wozniacki and former champion Maria Sharapova. She might catch the match on TV but only if the third cricket one-day international between Australia and India at the Melbourne Cricket Ground was not on due to the rain. “It’s another opportunity for me to go out and test myself against the world’s best,” she said. “I know they play later this afternoon. I’ll be home if it does happen to be raining and the cricket is not on, I will flick it over to that. “No, look, it’s another opportunity. Whoever wins that match, obviously they are both quality champions. It’s just an opportunity for me to go and test myself against the best.”