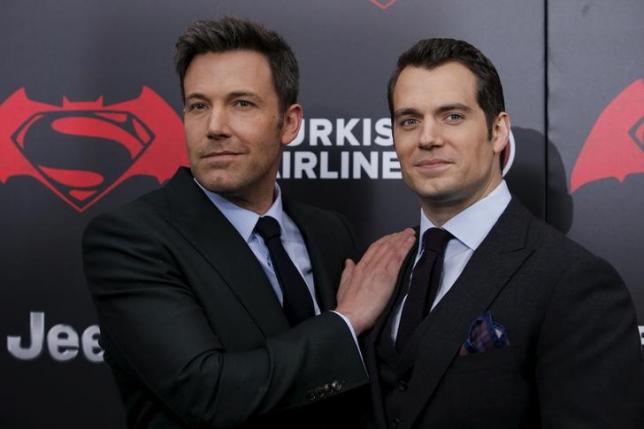 LOS ANGELES - “Batman v Superman: Dawn of Justice” steamrolled past records, debuting to a gargantuan $170.1 million over Easter weekend despite being pilloried by critics. That ranks as the top opening weekend for a DC Comics film, the best March launch ever, and the sixth biggest domestic opening weekend of all-time. It’s a shot in the arm for Warner Bros., which has been reeling from a series of costly bombs such as “Jupiter Ascending” and “Pan,” and is looking to the Dark Knight and Man of Steel throw down to kick off a series of inter-connected comic book franchises. Warner Bros. has already announced release dates for sequels and spin-offs for the next five years, with the first of these superhero adventures, “Suicide Squad,” coming out in August. “This sets us up well,” said Jeff Goldstein, Warner Bros. distribution executive vice president. “We’re very proud of what we’ve made before in the DC world and what’s coming in front of us is really exciting.” The studio spared no expense, tapping Ben Affleck to assume Batman’s cape and cowl, bringing back “Man of Steel” director Zack Snyder and Superman star Henry Cavill, and shelling out $250 million in production expenses, as well as millions more in promotional razzle dazzle. The bet appears to have paid off, positioning DC and Warners to have the kind of cinematic universe of costumed heroes and villains that rival Marvel has leveraged to enormous profits. It also undercuts the influence of top critics. Reviews for “Batman v Superman” were withering — the New York Times’ A.O. Scott said seeing the film is “… about as diverting as having a porcelain sink broken over your head” — but audiences didn’t care. They were kinder to the picture too, giving the film a B CinemaScore grade. “It’s the fans that speak the loudest,” said Jeff Bock, a box office analyst for Exhibitor Relations. “It proves how strong these characters are.” The film’s audience was largely male (66 percent) and crowds tended to be younger, with 63% of ticket buyers ranging between the ages of 18 and 34. Imax showings contributed $18 million to the gross, premium large format screens added an estimated $17 million to the earnings, 3D screens were responsible for 40% of the opening weekend results, and RealD 3D accounted for an estimated $47 million of the total. “The filmmakers delivered experientially on something that can best be seen in movie theaters,” said Greg Foster, CEO of Imax Entertainment. “This is not a movie that any one wants to see in a small venue.” Last weekend’s champ, “Zootopia,” slid to second place, racking up $23.1 million to push the family film’s domestic total to $240.5 million. Globally, the Disney Animation blockbuster has earned $696.7 million, pushing it past the likes of “Tangled,” “Big Hero 6,” and “Ratatouille.” In third place, Universal scored a counter-programming success with “My Big Fat Greek Wedding 2.” The romantic comedy pulled in female crowds not interested in watching the superhero beatdown, earning a solid $18.1 million from 3,133 locations. “It’s not so much to do with strategy and positioning as it is just a fun film,” said Nick Carpou, Universal’s distribution chief. “‘It’s about family and everyone has that experience and can relate to a lot of what’s in the film and the way people care for each other in the story.” “My Big Fat Greek Wedding 2” is a follow-up to the 2002 box office phenomenon, which grossed $368 million at the global box office. Gold Circle Entertainment, HBO and Playtone produced the sequel for $18 million and brought back original stars Nia Vardalos and John Corbett. The weekend was a grim one for Lionsgate, which saw “The Divergent Series: Allegiant” plunge 67% in its second weekend, eking out $9.5 million. The film has earned $46.6 million, a disappointing result that puts the studio in an uncomfortable position given that another sequel, “Ascendant,” is currently scheduled to debut in June 2017, when it will face off against heavy hitters such as “World War Z 2” and a reboot of “The Mummy.” Sony’s “Miracles from Heaven” tied for fourth, earning $9.5 million, and pushing the faith-based drama’s domestic haul to $34.1 million after two weeks. In limited release, Sony Pictures Classics debuted the Hank Williams drama “I Saw the Light” to $50,464 on five screens, for a per screen average of $10,093, while Bleecker Street’s drone thriller “Eye in the Sky” expanded from 35 theaters to 123 in its third week, earning $1 million and pushing its domestic total to $1.7 million. -Reuters