Batsman Maddinson should get another chance, says Starc 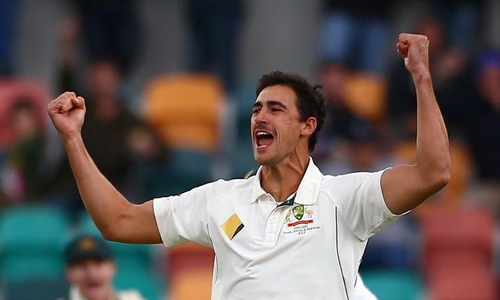 Batsman Maddinson should get another chance, says Starc

MELBOURNE - Nic Maddinson has struggled in his first two tests for Australia but New South Wales team mate Mitchell Starc said on Friday the batsman should get another chance to prove himself in the Boxing Day test against Pakistan. Maddinson was out of a duck on debut against South Africa at Adelaide before scoring one and four runs against Pakistan at Brisbane. The left-handed lower-order batsman could face the axe after selectors brought uncapped all-rounder Hilton Cartwright into the 13-man squad for the Melbourne test. "I definitely think Maddo should get another chance," Starc said. "In the end, it's up to the selectors but I think continued cricket, definitely at this level, can only help him. "It'd be a great opportunity for him on Boxing Day after we've had a couple of good wins as a unit as well (and) it'd be nice to stick together." Starc said continuity would help Maddinson, who turned 25 on Wednesday, improve at test level. "There were some times where I was backed more and given more of a chance, and (with) a longer run of cricket, I guess my performances started to pick up and I got that consistency in my game," the fast bowler added. Australia lead the series 1-0 going into Monday's test and Starc said he was itching to get started. Four years ago he was rested for the Boxing Day test at the MCG against Sri Lanka in a bid to manage his workload. Starc, who required surgery on a deep leg wound after a freak training accident in September, said his body was holding up well and that he was still bowling at a good pace late into the day-night fixture at Brisbane. "I think the last ball I bowled in that test match, which was in the 56th over, was 149 clicks (kmph) so (there's) no issues on my end," Starc said. "You'd have to ask the other quicks if they're any different, but I think the Boxing Day test just gets everyone up and ready to go. "From what I've seen around the guys the last day-and-a-half, everyone's feeling pretty good (and) recovered really well ... there's no reason why anyone would be missing out through injury or rest, as far as I know." -Reuters