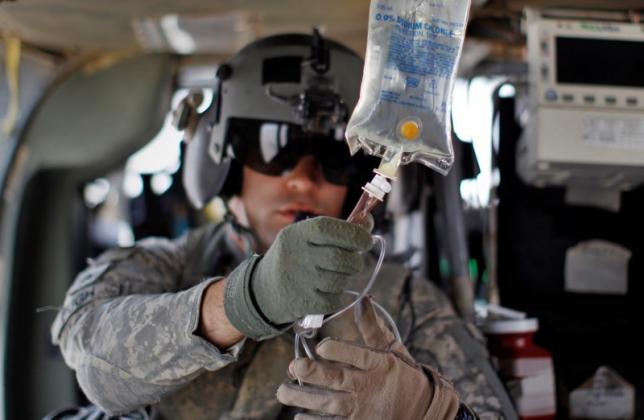 GAITHERSBURG – Paramedic Dean Elliott rummaged through the ambulance's emergency kit and pulled out a pint-sized red power drill, a tool whose use was honed on the battlefields of Iraq and Afghanistan. The drill allows high-speed insertion of a needle directly into a bone's marrow to give a patient intravenous fluids when life-saving seconds count, said Elliott, a lieutenant with the Montgomery County, Maryland, Fire and Rescue Service. "The needle sits on there and you basically drill it right into the bone. It's much easier and quicker," Elliott, who is also a 30-year Navy corpsman, said as he demonstrated in the back of the ambulance. The needle drill is among a raft of products and techniques learned on battlegrounds in Iraq and Afghanistan that have transformed how US doctors and emergency personnel back home help trauma patients survive life-threatening injuries. Modern tourniquets that can be applied with one hand and have attached turning devices are replacing the makeshift handkerchiefs and stick or belt of past decades. Clamps, needle drills and wound gauze impregnated with blood-clotting agents have been developed commercially from the hard lessons learned from more than a decade of fighting, trauma treatment experts say. Improved transfusions and airway tubes, a focus on stopping blood loss, and training to coordinate and improve care from injury site to operating room have also been critical to the new approach in emergency medicine in US streets and hospitals. "All of this together has massively increased survivability and pretty much all of them have been brought into the civilian ambulance population," said Dr. Howard Mell, a spokesman for the American College of Emergency Physicians. –Reuters