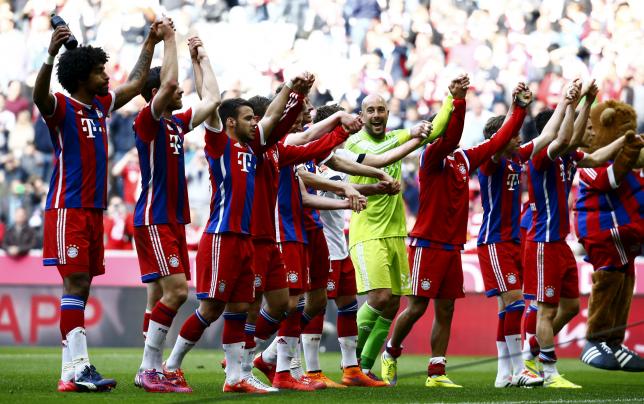 BERLIN - Bayern Munich may be missing some of their biggest names when they travel to Porto for the first leg of their Champions League last eight on Wednesday but the Germans are confident they have enough firepower to defend their favourites tag. Chasing a second treble after 2013, Bayern will be without Arjen Robben, Franck Ribery and Bastian Schweinsteiger among others but they know their season will not be a success if they do not advance in the Champions League. Bayern left a day earlier than usual, arriving in the Portuguese city on Monday for Wednesday's game as coach Pep Guardiola shifts the focus away from injuries to their dominant domestic season. Porto beat them in a memorable European Cup final in 1987 -- their only win in five matches against Bayern. But the only thing on the Germans' mind is taking an advantage back to Munich for the return leg and then qualify as they did on two previous occasions against Porto in the quarter-finals. "We know that it will not be an easy game at Porto," said club CEO Karl-Heinz Rummenigge. "We are being given the favourites tag but we have no problem with that." Five-time winners Bayern are looking for a fourth successive semi-final appearance but will also be without injured defenders David Alaba and Medhi Benatia. Coach Guardiola, however, will have central defender Jerome Boateng, rested in Saturday's 3-0 win over Eintracht Frankfurt, back in the squad. Porto, looking for their first semi-final appearance since winning the trophy in 2004, also enjoyed a successful dress rehearsal, beating Rio Ave 3-1 on Saturday. Winger Ricardo Quaresma was again on target for them taking his tally to three goals in two matches. The two-times European champions are also in the running for more than just one title this season, three points off leaders Benfica ahead of the derby in two weeks. "The team did many things right and they had a pretty good game, overall," coach Julen Lopetegui, a former team mate of Pep Guardiola at Barcelona and Spain, told reporters after Saturday's league win. Lopetegui, who is in unchartered territory in his short club coaching career, said his team was hitting top form at just the right time and his players were dreaming of an upset. "We are prepared for this time of the season," he said. "Playing the quarter-finals of a competition as big as this one is a reward for everyone and the only thing on our mind is dream and ambition, there is nothing else to take to that game." - Reuters