Beauties in a brasserie for Chanel's Paris fashion show 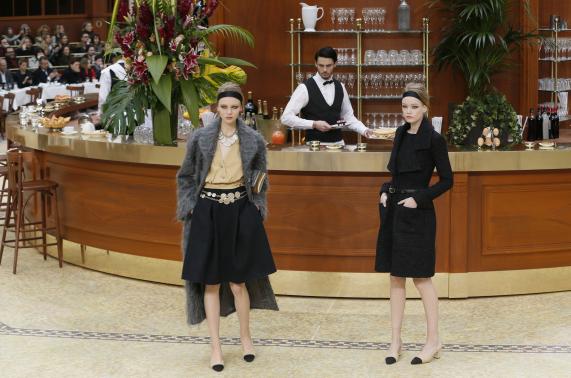 Beauties in a brasserie for Chanel's Paris fashion show

PARIS (Reuters) - I'll take a café, a croissant and a black and ivory silk cocktail dress, s'il vous plait. Under the soaring glass ceiling of the Grand Palais, Chanel's Winter 2015 show was staged in an elaborate pop-up restaurant, complete with surly Parisian waiters in black waistcoats and white shirts and a bar serving champagne and coffee. Creative Director Karl Lagerfeld showcased dresses and coats worn by models flitting in and out of the "Brasserie Gabrielle", ordering coffee or perusing newspapers. "It's the daily life of a certain category of people," Lagerfeld explained after the show. "This is down-to-earth daily life - in certain circumstances." The effect was reinforced by the hard-boiled eggs, croissants and plates of olives and radishes laid out on the bar of the brasserie named after the label's late founder Coco Chanel, whose real first name was Gabrielle. The saucy and sparkling collection celebrated both the couture house's archives and the German designer's penchant for novel, modern fabrics and textures. Besides showcasing an array of Chanel staples -- slimly tailored knit suit jackets paired with pleated or cigarette skirts -- Lagerfeld had some fun playing with puckering. Sleeves of jackets became armor-like as they were covered with hundreds of crinkly tucks, giving volume and modernity to the otherwise traditional shapes. Lagerfeld said he wanted to "give a new touch to the little black dress" with a series of sheer black silk cocktail dresses lined in nude. Sleeveless and feminine, they came with modified Peter Pan collars or bows at the shoulder. Guests lingered afterwards, hesitant to leave the festive atmosphere of the brasserie. One barman said models do indeed eat, as he had served a croissant to one of them in the show. As for his modeling debut? "We had a great time," he laughed, wiping down the copper bar one last time.