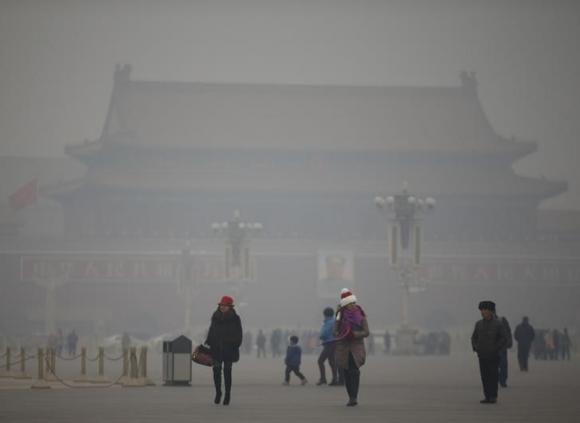 BEIJING (Reuters) - For years, Liu Ruiqiang put up with chronic smog in China's capital of Beijing, but he didn't want to take any chances when his daughter was born. The salesman now carries a handheld pollution sensor everywhere. On days when air pollution reaches hazardous levels, his toddler daughter is confined to their home, where a pair of constantly whirring air purifiers make it safer to breathe. Liu, who says he's a lower-middle class Beijinger, estimates he has spent more than 40,000yuan ($6,375) in the past couple of years to counter the effects of pollution on little Yunshu. "If we don't think of a way to balance it out or find some basic ways to help us recover, eventually our health will be destroyed," the 37-year-old told Reuters. Like millions of Chinese, Liu and his family are paying the price for decades of red-hot economic growth that have lifted hundreds of millions out of poverty, but have taken a toll on the environment due to rapid industrialization. Over the past seven years, levels of particulate matter in Beijing's air smaller than 2.5 micrometers in diameter (PM2.5) averaged nearly five times the recommended daily level set by the World Health Organization, according to data from a monitoring station at the U.S. embassy. The medical implications of sustained exposure are sobering. A study by Greenpeace and scientists at Peking University based on 2013 data attributed more than 257,000 premature deaths in 31 Chinese cities to PM2.5, making it a bigger killer than smoking. Awareness of the dangers of Beijing's skies is on the rise, thanks to growing data on its air quality. Anyone can monitor pollution using apps providing hourly updates of PM2.5 levels, based on government or U.S. embassy readings. Sales of air purifiers are expected to see annual growth of 33 percent over the next five years, according to TechSci Research, but they don't come cheap. High-end models can cost much more than 3,600 yuan ($574), the average monthly salary in Beijing. BYE-BYE, BEIJING Some expatriates are considering leaving China for good. J. Kim, a Korean who has worked there for more than 10 years, said he developed rhinitis and asthma during his most recent stint in Beijing, as a result of breathing its polluted air. When pollution levels reached a record in January 2013, a phenomenon dubbed the "airpocalypse", Kim decided to leave. He sent his children to South Korea last year and will join them as soon as his company, a maker of electric vehicles, finds him a suitable post back home. "For Chinese there's nothing they can do, but as a foreigner I have the choice to live here or somewhere else," he said. Rising public discontent over the state of the environment has proved a powerful catalyst for change amid signs the government is starting to take the environment seriously. China will "declare war on pollution," Premier Li Keqiang told parliament in an opening address in 2014. A tougher environmental law took effect on Jan. 1, while a new environment minister took charge on Friday. But citizens must push harder to ensure environmental measures triumph over business interests, one expert said. "In China, what we need is wide participation from society, and monitoring from the public to make sure the laws are implemented," said Ma Jun, founder of the Institute of Public and Environmental Affairs. For now, Liu sees no silver lining in Beijing's toxic cloud. "It's very unlikely we'll see the pollution issue being solved in the next 10 years," he said. "It's not realistic."