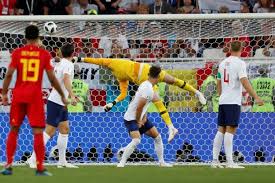 KALININGRAD, Russia (Reuters) - It had been viewed as the game no-one wanted to win but Adnan Januzaj’s fine finish early in the second half gave Belgium a 1-0 victory over England to secure the Group G top spot in a contest between two sets of reserves.
The result means Belgium, who won all three of their group games to finish on nine points, will face Japan in the last 16 while England, who came second with six, take on Colombia. That gives Gareth Southgate’s England a tougher test in the second round but should they get past the South Americans they will find themselves on a much more promising path to the final. Belgium’s side of the draw includes Brazil, who they could face in the quarter-finals, Argentina, Portugal and France. England’s opponents are, on paper at least, easier — Sweden or Switzerland await in the last eight — and they face less travelling should they progress. “The knockout game is the biggest game for a decade, so we had to make sure our key players were preserved,” said Southgate, having left out captain Harry Kane among others. “We created openings to get something from the game, but we have to keep improving. I think the supporters know what the most important thing is,” he added.

If it was a gamble not to go for the win wholeheartedly then it is one Southgate appears at ease with and he certainly had no regrets about his team selection. “Sometimes I think you have to look bigger picture and make decisions that might be criticised. “When you are leader and a manager you need to make decisions that are right for your group and sometimes those decisions will be criticised and I understand that,” he said. It was only Belgium’s second ever win over England and their first since 1936 and coach Roberto Martinez suggested he was not worried about the impact of the result on his team’s possible future opponents. “The victory is a consequence of a very good performance. You cannot plan the ideal scenario, you’ve seen big nations already eliminated,” said the Spaniard. “We need to look at ourselves, we are a stronger group than we were before the game. We’re facing Japan, we’ve got to be ready for it,” he said.

When Belgium and England play their last 16 matches the lineups will bear little resemblance to those on Thursday. As expected they used their squads to the full — Martinez switching nine players and Southgate bringing in eight, a decision he described as a ‘no brainer’ in the circumstances. Belgium created the better openings in a poor first half while England showed greater urgency but a lack of finesse in the final third where they missed tournament top scorer Kane and the movement of Jesse Lingard, who both watched from the bench. Former Manchester United midfielder Januzaj broke the deadlock with a superb curling effort in the 51st minute and the manner of the goal celebration should have silenced any fears that Martinez’s side were not interested in victory. England then pushed on looking for an equaliser but they lacked a cutting edge. Striker Marcus Rashford had the best chance but his shot was already wide of the target when keeper Thibaut Courtois got his fingertips to the ball. Belgium came close to a second goal in the final minutes when Jordan Pickford made a diving save to keep out a rasping Dries Mertens effort but by then both sides seemed to have accepted their lot and can now focus on the second round. “We are not looking at paths,” Martinez said. “For now, Japan is the only priority that we have.”