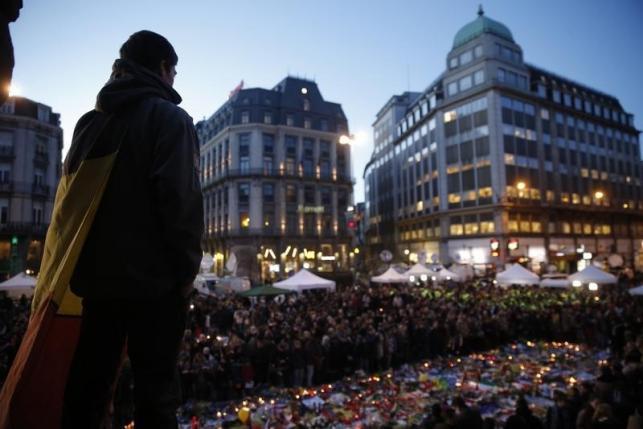 BRUSSELS – Belgian prosecutors have charged three men with terrorist offences, including a suspect who local media said appeared on security footage with two suicide bombers at Brussels airport shortly before they detonated their bombs. Prosecutors named the third man as Faycal C while media identified him as Faycal Cheffou, and said he was the man wearing a hat and a light-colored jacket in last Tuesday's airport picture that showed three men pushing baggage trolleys bearing luggage. Prosecutors said he had been charged with taking part in the activities of a terrorist group, and actual and attempted terrorist murder. His home had been searched though no weapons or explosives had been found. Two other men, Aboubakar A. and Rabah N., were also charged with terrorist activities and membership of a terrorist group. Rabah N. was wanted in connection with a related raid in France this week that authorities say foiled an apparent attack plot. A total of 31 people were killed, including three attackers, and scores wounded in the Brussels attacks which were claimed by Islamic State and, as well as the airport, included a bomb on a metro train in the city center. The attacks in Brussels, home to the headquarters of NATO and the European Union, took place four months after Islamic State militants killed 130 people in Paris and sent shockwaves around Europe and across the world. With increasing signs that the Brussels and Paris attacks were carried out by members of the same network, police across Europe arrested nine people in raids in Belgium and two in Germany before the weekend. Three men were arrested in Brussels on Friday, including one suspect shot in the leg at a tram stop in the district of Schaerbeek. He was subsequently identified as Abderamane A. and Belgian authorities said on Saturday they were holding him for a further 24 hours. Another person, Tawfik A., who was taken in for questioning on Friday, had been released. Friday's police operation was linked to the arrest in Paris the previous day of an Islamist convicted in Belgium last year and suspected of plotting a new attack, Belgian prosecutors said. Cheffou, whom media said was a freelance journalist, was identified by a taxi driver who drove the attackers to the airport on March 22, Le Soir newspaper said. Earlier, police and government sources said it was highly likely he was the third man seen at the airport. Brussels mayor Yvan Mayeur told Le Soir that Cheffou had been detained a number of times at a park where he sought to encourage asylum seekers camped there to turn to radical extremism. The self-styled freelance journalist was "dangerous", the mayor said, and he had been banned from visiting the park. Police, speaking at a separate briefing in Brussels, said 24 victims from nine different nationalities had been identified so far from the Brussels bombs. Four people are unidentified. Two of the three Brussels suicide bombers were brothers, one of whom died at the airport while the other took part in the attack on the metro train near Maelbeek station in Brussels. –Reuters