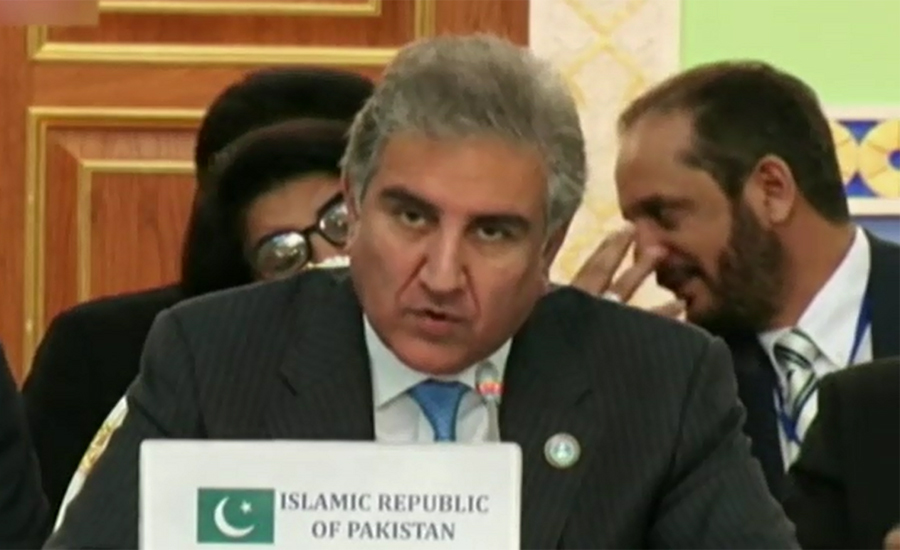 DUSHANBE, Tajikistan (92 News) – Foreign Minister Shah Mahmood Qureshi on Friday said Pakistan believes in working jointly for the mutual interests of the (SCO) countries. Addressing a meeting of the SCO on Friday, he said that establishing peace is vital to ensure international trade. The minister reiterated that Pakistan will play its full role to promote organizational objectives of the SCO. He said the SCO could benefit from Pakistan's experience in combating terrorism. "Pakistan has played an important role to combat terrorism and extremism. Regional conflicts and terrorism are major challenges that should be addressed,” he said. Earlier, Foreign Minister Shah Mehmood Qureshi called on the Tajik Prime Minister Qohir Rasulzoda on the sidelines of the 17th Meeting of the Council of Heads of Government Meeting being held in Dushanbe, Tajikistan. The minister congratulated the Tajik prime minister for the successful convening of the meeting in the beautiful City of Dushanbe. He conveyed the greetings and warm wishes of Prime Minister Imran Khan to the Tajik prime minister. The two sides discussed issues of bilateral, regional and international issues of mutual concern. Both sides agreed to strengthen and enhance cooperation in the area of trade and investments. Noting regular political and parliamentary exchanges, the minister underlined the importance of closer economic and investment ties and reaffirmed Pakistan's desire for further intensifying bilateral cooperation in all fields, terming Tajikistan as a key partner in the region. The two sides agreed that bilateral security and defence cooperation was developing satisfactorily. The two sides also noted the progress on CASA-1000 project and agreed on fast tracking its implementation. He extended an invitation to Prime Minister Qohir Rasulzoda to visit Pakistan at his earliest convenience. Pakistan was one of the first countries to establish diplomatic relations with the brotherly country of Tajikistan soon after its independence. The bilateral relations between the two countries are based on mutual respect, shared interests and brotherhood and have been growing positively and steadily over the years.