Bell and Root lead England out of trouble 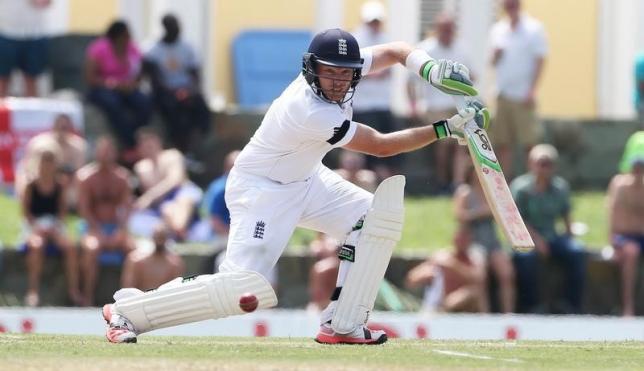 Bell and Root lead England out of trouble

ANTIGUA - A fine innings of 143 from Ian Bell helped England to recover from a terrible start and finish the first day of the first test against West Indies on 341 for five in Antigua on Monday. After being put into bat, England made a shaky start at the Sir Vivian Richards Stadium and stumbled to 34 for three before lunch. But Bell and Joe Root (83) took control in the afternoon session with their 177 run partnership killing West Indies' early momentum and then moving England into a strong position. Although Bell was removed late in the day after the hosts took the second new ball, England will still be satisfied by their day's work. West Indies captain Denesh Ramdin was rewarded for his decision to make the visitors bat as his seamers got the early breakthroughs he was hoping for. Jonathan Trott, returning to test cricket for the first time since quitting the 2013-14 Ashes Tour with stress-related problems, went in the first over. Trott, winning his 50th cap, edged a good delivery from Jerome Taylor to Darren Bravo who pocketed the straightforward catch at slip. England skipper Alastair Cook made 11 before he was bowled by Kemar Roach, getting an inside edge on a delivery that cut back. The West Indies opening pair bowled a consistent full length and tight line, making it tough for England's batsmen, but it was a wider ball from Jason Holder that removed number three Gary Ballance. The Zimbabwean-born batsman reached at Holder's full delivery and flashed a high catch to Bravo who again captured it gleefully. England badly needed a solid partnership to steady the ship and Bell and Root delivered exactly that, picking off the looser balls from a West Indies attack that had lost its earlier precision. With signs of tiredness creeping into the Caribbean team's play, the England pair stepped up the run-rate, Sulieman Benn dropped Root, spilling out a routine catch when the England man was on 61. Bell brought up his century with an edge past slip off Marlon Samuels but West Indies finally brought the partnership to an end when Root played on from Taylor. Ben Stokes, unbeaten on 71 at the close, quickly restored England's dominance however, taking an aggressive approach. Bell looked distraught at edging a beautiful rising and moving delivery from Roach to wicketkeeper Ramdin, but the standing ovation he received indicated the value of his innings to his team. - Reuters