Bells toll for Clarke in Australia 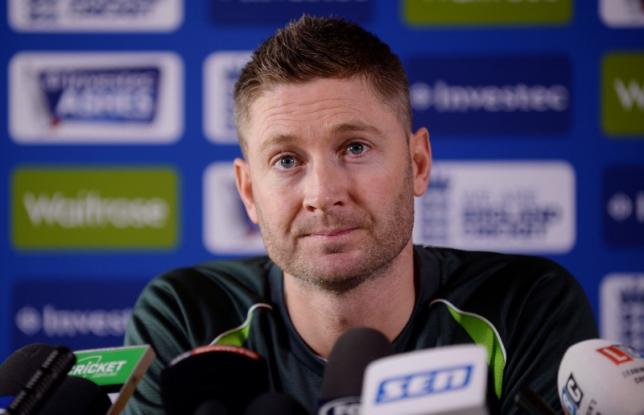 Bells toll for Clarke in Australia

MELBOURNE - Michael Clarke's storied 114-test career appears certain to end sourly after the Australia captain failed again with the bat to slow his team's slide into an humiliating Ashes defeat. Leaden-footed and ill at ease at the crease, Clarke eked 13 grudging runs from 37 deliveries before being caught in the slips off seamer Mark Wood on day two of the fourth test. His wicket all but ensured England will be spared from batting again at Trent Bridge, while hastening an inevitable 3-1 series defeat for the outclassed tourists. The scratchy 13 followed his first innings 10, which ended with an absurd swipe at a loose Stuart Broad delivery when his team desperately needed a cautious captain's knock rather than a free-wheeling assault befitting a tail-end slogger. Clarke now averages 16.71 for the series, the worst performer among Australia's recognised batsmen who have played more than two tests in the series. Were Clarke to drill harder into the figures, he might note an unedifying similarity to the dismal returns Ricky Ponting managed in his last test series as captain, when he averaged 16.14 from eight innings in the 2010/11 Ashes series. Though 34, badly out of form and trailing 2-1 in the series, Clarke was strident on the eve of the Nottingham test that the Ashes would not be his swan-song, win or lose. However, that defiance has been dismissed in Australia where the belief he retains the right to choose the timing of his exit is fast evaporating. "Michael Clarke is finished in test cricket. It is obvious and it is now a matter of managing him out of the game," cricket writer Peter Lalor said in The Australian newspaper. Clarke bowed out of one-day cricket after leading Australia to a record fifth World Cup triumph in March, and few in his home country would have begrudged his quest to retain the Ashes in England. But with each consecutive failure in the series, Clarke's determination to prolong his test career has seemed more indulgence than necessity. His demotion from fourth to fifth in the batting order at Nottingham was rationalised as part of a selectors' gambit to add depth to a flaky batting order, but in essence appeared an act of protection for a fallen great. As Clarke has laboured, his understudy Steven Smith has also come undone since guiding Australia to a victory at Lord's with a sparkling century. The faltering partnership between a captain and his deputy should be familiar to Clarke, who also struggled with the bat during the ill-fated 2010/11 series when heir apparent to the under-fire Ricky Ponting. Australia reveres its test captains like few other cricketing nations and Clarke retains the special affections of a public that was rocked by the death of Phillip Hughes but grateful for Clarke's dignity in the grieving of his team mate. Even as Clarke prodded and poked for his 13 at Trent Bridge, he surpassed Matthew Hayden to be fourth on Australia's list of test run-scorers, a milestone of a master batsman all but lost in the turmoil of an Ashes capitulation. The men above him -- Ponting, Allan Border and Steve Waugh -- were all captain-batsmen whose retirements would ultimately see their teams move onwards and upwards. Australia's return to the top test ranking last year, however brief, owed much to Clarke's astute captaincy and brilliance with the bat. Ironically, their hope of avoiding a deep and prolonged slump may rest on his ability to walk away with dignity in defeat. -Reuters