LONDON (92 News) - Ben Stokes's heroics to win England the Headingley Test have taken him to No.2 on the MRF Tyres ICC Test Rankings for All-rounders, and seen him break into the top 15 on the batting charts.

Ben Stokes, whose 135* in the third Ashes Test was one of the all-time great fourth-innings knocks, also took four wickets in the match, sending down 24.2 overs (including stepping in for an injured Jofra Archer) in Australia's second innings, over two days with no break. As a result, he rose 13 places to No.13 on the MRF Tyres ICC Test Rankings for Batsmen, with a career-best 693 rating points. He rose by two places on the all-rounders' chart, with a career-best 411 rating points, only behind Jason Holder, after the latest update on Tuesday, 27 August.

Archer, meanwhile, continued his stunning start to international cricket, his six wickets in the first innings helping him vault 40 places to No.43 on the MRF Tyres ICC Test Rankings for Bowlers in just his second Test. Overall, it was an upward trend for pace bowlers: India's Jasprit Bumrah stormed into the top 10, climbing nine places to No.7 with a career-high 774 points after his incredible 5/7 in the second innings in Antigua against West Indies. He was closely followed by the Windies' Kemar Roach (up three to No.8), while Australia's Josh Hazlewood was rewarded for his nine wickets at Headingley with a climb of three places to No.12. India's Ishant Sharma reached a career-best 671 points, sitting just outside the top 20. Trent Boult, who reached the milestone of 250 Test wickets as New Zealand drew the Test series in Sri Lanka, is now in the top five. Speedster Pat Cummins continues to lead the charts, marking a strong week for fast bowling. 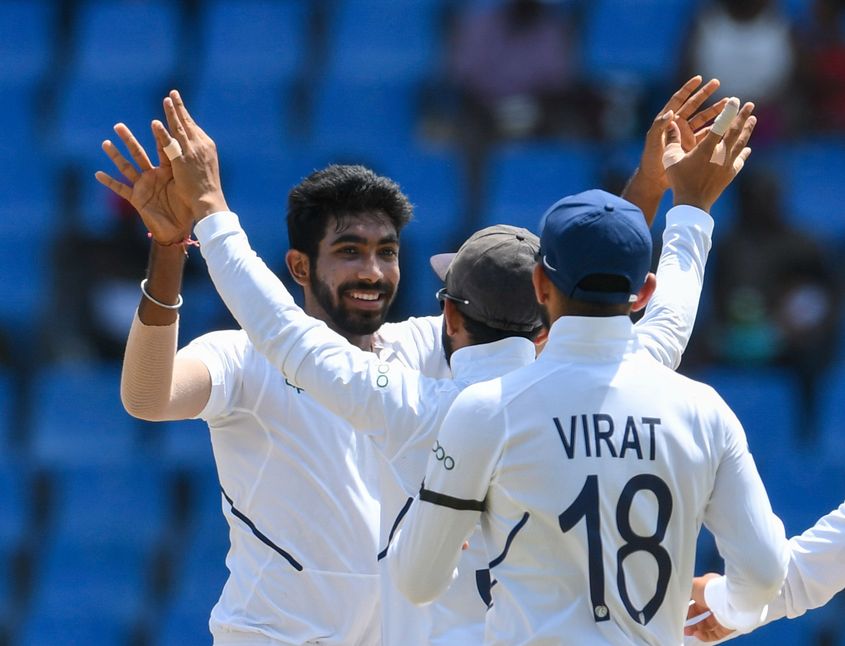 Jasprit Bumrah has broken into the top 10
Among batsmen, in a chart led by India captain Virat Kohli, his counterparts from Sri Lanka and England, Dimuth Karunaratne and Joe Root, made strides. The Sri Lanka skipper had to be content with a half-century in Colombo, and while it didn't earn his side a win, it brought him a two-place move to No.6. Root, who shook off a spell of poor form with a fighting half-century with the series on the line, followed him at No.7. Middle-order anchors Tom Latham (up five to No.8) and Ajinkya Rahane (up 10 to No.11) moved up after vital centuries for New Zealand and India respectively, while G Hanuma Vihari (up 40 to No.70) and Marnus Lauschangne (up 45 to No.37) grabbed opportunities to cement their places in their sides.