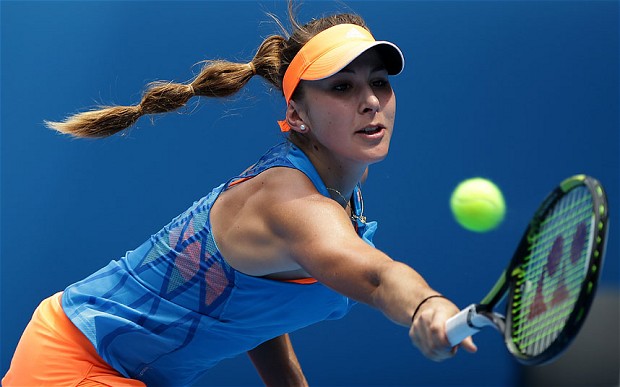 TORONTO - Swiss teenager Belinda Bencic capped a brilliant run to the Rogers Cup title on Sunday when a distressed second seed Simona Halep retired from the final after losing the first three games of the third set. Bencic needed nearly two hours and 30 minutes on a sweltering center court to see off a determined Halep 7-6(5) 6-7(4) 3-0 and claim the biggest title of her young career, putting down a marker as a player to watch at the upcoming U.S. Open. The 18-year-old's Rogers Cup debut was a memorable one as Bencic's drive to the title included a stunning semi-final upset of world number one Williams and two former number ones in fourth seed Caroline Wozniacki and fifth seed Ana Ivanovic. "I'm really sorry it had to end like this, I am really sorry for Simona, I hope she will be fine for the next tournament," said Bencic, the first Swiss woman to reach the final of the Rogers Cup since her mentor Martina Hingis in 2006. "For me it has been an incredible week, I cannot believe it. A win is a win and I had to fight really hard today." It was Bencic's second title in two months, following her breakthrough win at the Aegon International on grass in England in June. She arrived in Toronto ranked 20th in the world. Halep produced a gutsy effort but the Romanian appeared in trouble right from the start as she struggled with the heat and a sore left thigh that required treatment throughout the match, including a medical time out when medical staff checked her blood pressure. "In the first set I felt a little bit muscle and then it was going to the knee and in the second set I felt bad, like stomach cramps and dizzy and stuff like that," explained Halep. "I was thinking that I need a miracle to finish the match. "I tried just to finish the match, but at 3-0 I said it is no sense to continue, and I stopped." Down 5-3 in the second and with Bencic serving for the match, the 23-year-old Halep dug deep into her reserves and forced the set to a tiebreak which she won to thundering applause from the sun-baked crowd. But the effort to force a third set proved too much. Trailing 3-0, Halep went to her chair during the changeover and then quickly rose and walked over to Bencic and shook hands, telling her she could not continue. "I don't know why I continued to play, maybe for the fans," said Halep. "They were like screaming all the time to push me to still play. "I have no idea why I still played the second set but I did great, and I'm happy that I could find the power to win the second set." - REUTERS