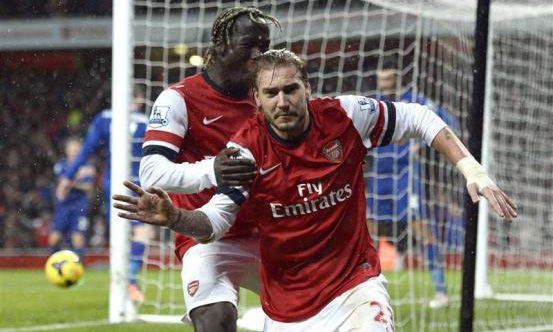 DENMARK - Nicklas Bendtner scored twice in the last seven minutes to complete a superb hat-trick as Denmark came from behind to beat the United States 3-2 in a friendly international in Aarhus on Wednesday. It turned out to be a double celebration for captain Christian Eriksen as he became the youngest Dane to win a half-century of caps. The hosts enjoyed most of the possession but it was Jozy Altidore who put the U.S. ahead after 19 minutes, latching on to a cross and thumping it home with his left foot. VFL Wolfsburg forward Bendtner leveled the score after 33 minutes by slotting the ball into an empty net from five meters out. Altidore turned provider in the second half, flicking the ball into the path of Aron Johannsson, who poked home to take the lead again before Bendtner netted twice in the final seven minutes to steal the win for his side. The visitors frustrated the Danes for most of the second half with some dogged defending before Bendtner popped up unmarked at the far post to sweep home the equalizer. He then smashed home the winner in the final minute to complete the comeback. It was Bendtner's first hat-trick for the national team, and drew praise from United States coach Juergen Klinsmann. "When you score three goals in a game you deserve all the compliments in the world, and Bendtner deserves them," Klinsmann told a news conference, adding that a draw would have been a fair result. Having joined VfL Wolfsburg in Klinsmann's home country of Germany last year, Bendtner has struggled to adapt, but the U.S. coach told reporters that he believed the 27-year-old Dane had a bright future. "Sometimes it goes well and you score and gain confidence, and three goals is the right medicine for Bendtner. I wish him the best in the future," said Klinsmann. Denmark take on Euro 2016 hosts France in Paris on Sunday, while Klinsmann's side continue their CONCACAF Gold Cup preparations by taking on Switzerland in Zurich on March 31. - REUTERS