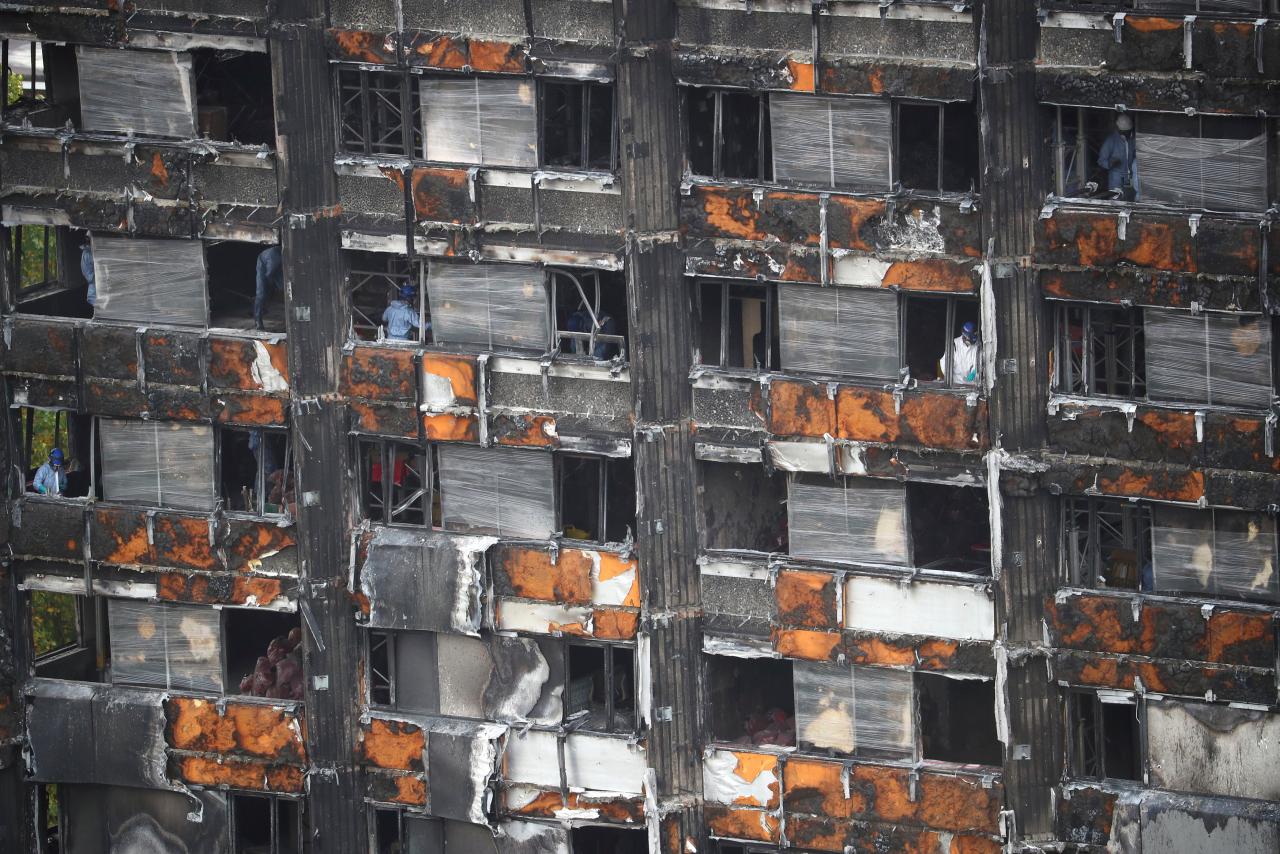 LONDON (Reuters) - Survivors of London’s deadly Grenfell Tower fire wept as they listened to a bereaved father pay tribute to his baby son and heard a recording of another victim making his last phone call from the burning building. Those were among many heartbreaking moments on the first day of oral hearings at a public inquiry into the blaze, which killed 71 people in the social housing block on the night of June 14, 2017. The fire led to a national outpouring of angst over whether poor quality social housing and neglect by the authorities of an ethnically diverse community had played a part in the tragedy. The public inquiry, which will last many months, aims to establish the causes of the disaster, but first it has invited the bereaved to talk about their loved ones and show pictures or videos if they wish. Marcio Gomes, an IT worker who fled from the 21st floor through thick, poisonous fumes with his heavily pregnant wife Andreia and their two daughters, went first with an emotional tribute to his son Logan, who was stillborn in hospital hours after the escape. “I held my son in my arms, hoping it was all a bad dream, wishing, praying for a miracle, that he would open his eyes, move, make a sound,” Gomes said, crying, his wife by his side. Andreia, a clothes shop supervisor, was in an induced coma being treated for cyanide poisoning from the fire at the moment of Logan’s birth. He had been due to be born on Aug. 21, 2017. Family photographs flashed up on a screen, including an ultrasound scan image of Logan in his mother’s womb, and images of him just after his birth.

“WE ARE NOW LEAVING THIS WORLD”

The inquiry also heard a recording of Afghan immigrant Mohamed Saber Neda phoning a relative as the fire raged. “Goodbye. We are now leaving this world, goodbye. I hope I haven’t disappointed you. Goodbye to all,” Neda was heard saying in a calm voice. Neda’s brother, wife and son Farhad paid moving tributes to the 56-year-old who ran his own chauffeur business and supported Farhad through engineering studies and countless taekwondo tournaments. Farhad’s medals were lost in the fire. The family of another victim, 56-year-old Denis Murphy, described him as a devoted family man and fanatical fan of Chelsea soccer club, drawing tearful smiles as they talked about his playful disagreements with his son, who supported Tottenham. Murphy’s sister Anne-Marie said the only material thing left from Denis’s apartment inside Grenfell Tower was a handful of coins. “They are so poignant to us as he would give you his last pennies if you ever needed them,” she said. The inquiry also heard a tribute to fine art photographer Khadija Saye, who died in the fire aged 24 with her mother Mary Mendy, 52, an immigrant from Gambia in West Africa. Saye had just broken through in the art world with an exhibition of self-portraits at the prestigious Venice Biennale, where three buyers had bid for her work.

Other Grenfell relatives and friends, lawyers and journalists in the hearing room wept as they watched and listened to one harrowing moment after another. The commemoration hearings are expected to last nine days. The hearings into the circumstances of the fire will start on June 4. Separately, the police are conducting a criminal investigation which could result in charges against organisations or individuals involved in the construction, maintenance or refurbishment of the tower. While the official death toll from the fire is 71, the inquiry will commemorate 72 people as it is including Maria del Pilar Burton, a resident of the tower who died in January, having never left hospital since she escaped from the fire. Critics have accused the local authority in Kensington and Chelsea of being too slow to rehouse the survivors and help them rebuild their lives. 139 out of the 210 Grenfell households in need of a new home had moved into temporary or permanent properties. The remainder were still in other forms of housing, including 15 households still in what is classed as emergency accommodation.