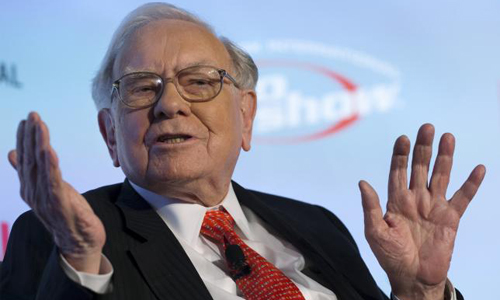 NEW YORK - Warren Buffett, the billionaire chief executive officer and chairman of Berkshire Hathaway Inc, said Tuesday that an exit by Greece from the euro zone could be constructive for the region. "If it turns out the Greeks leave, that may not be a bad thing for the euro," Buffett told cable television network CNBC. He said a Greek exit from the euro zone could lead member countries to come to better agreement about fiscal policy. "If everybody learns that the rules mean something and if they come to general agreement about fiscal policy among members or something of the sort, they mean business, that could be a good thing," Buffett said. Buffett also said there would be no "finish line" to deals like Kraft Foods Group Inc's announced merger with H.J. Heinz Co. "We would hope it would not be the last major transaction," Buffett said. "There is no finish line." He said that Berkshire and private equity firm 3G Capital have not discussed other potential targets. Heinz and Kraft, backed by Berkshire and 3G, last week said they would combine in a $46 billion deal. - REUTERS