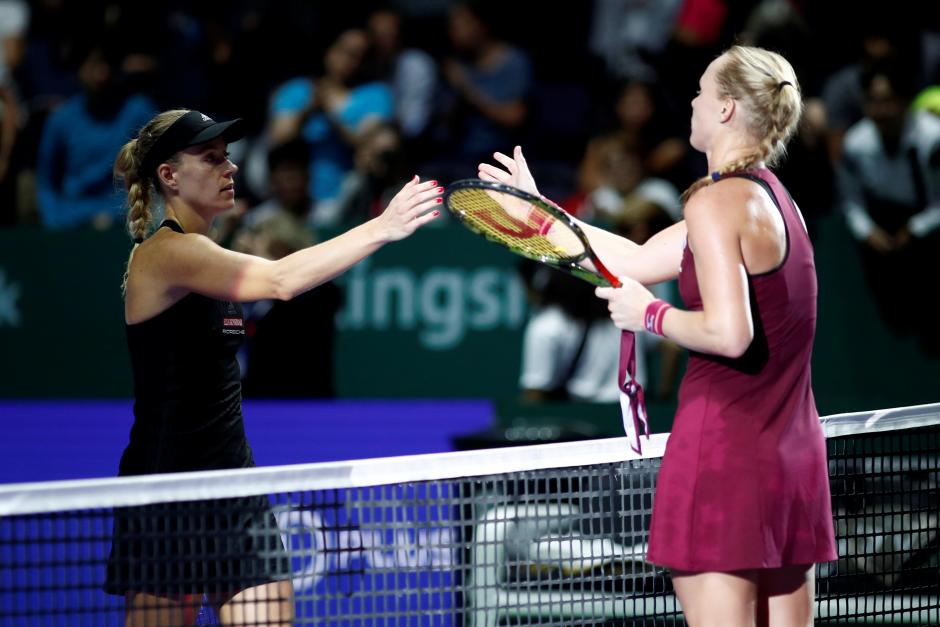 SINGAPORE (Reuters) - Kiki Bertens was suffering a nightmare debut at the WTA Finals against Wimbledon champion Angelique Kerber on Monday when the Dutchwoman decided to change her tactics after a pep talk with her coach.
She ended up winning the match. Bertens, only in the eight-player field when world number one Simona Halep withdrew through injury, had been swept aside 6-1 in the first set and was 2-1 down in the second to Kerber when she called on Raemon Sluiter for a tactical debate. “Honestly, beginning of the second was just like hopefully I can get a few more games. I was really like playing not good, stressing a little bit too much, thinking about playing bad,” she told reporters after her stunning 1-6 6-3 6-4 triumph. “Then I had a chat with Raemon. He was, like... ‘try to play more aggressive, go for your shots’. “Yeah, that went a little better from there on.” To say it ‘went a little better’ is an understatement with Bertens breaking her German opponent twice to level the contest before she emerged from the topsy-turvy decider with her 11th victory over a top-10 player this season. “Well, before the match the plan was to try to play aggressive where I can but not rush too much. So just try to play the rally and see how it goes,” the 26-year-old added. “Then I called him (Sluiter) ... in the first set. The plan was just hang in there, try to be tough, just play some more rallies and then see. But I was making so many mistakes, so that didn’t work out. “The third plan finally worked better. And that was like to play more aggressive and go for my shots. “But it was great. I was fist pumping so much that I got some cramps in the arm. It was just really exciting to win this match. I think there was a lot of stress during the match, so maybe not too good for the body.” Bertens will conclude her Red Group round robin play against American Sloane Stephens and Naomi Osaka of Japan, and the Dutchwoman is hoping she can dictate terms a little better in those matches. “Hopefully for the next match I can go out there, play a little bit more like how I want to play,” she added.