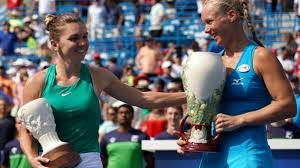 (Reuters) - Dutch surprise Kiki Bertens saved a championship point before going on to earn a shock Cincinnati Masters final triumph 2-6 7-6(6) 6-2 over a fatigued world number one Simona Halep on Sunday.
Bertens came back from the brink against Romania’s top seed in an exhausting second set tiebreaker, then won five of the final six games in the decider to lift the sixth and biggest title of her career. A gutsy forehand by Bertens saw her stave off a match point in the tiebreaker before she went on to take control in the third set and eventually served a sixth ace to finish the contest after an absorbing two hours and five minutes. “I cannot find words for this moment. I’m so happy,” a tearful Bertens, whose previous titles had all come on clay, said on court. The victory was the 26-year-old Bertens’ first ever over a world number one and her sixth consecutive triumph over a top-10 opponent and will see her move up to a career-high number 13 in the world rankings. It also ended a nine-match winning streak by Halep, who lost in the Cincinnati final for a third time. “Maybe once I will win one because I love to play here,” said Halep. “I was a little bit tired this week but it was a pleasure to come here and play. “Definitely, I want to congratulate Kiki. You played amazing and you definitely deserve this title.” Despite the loss, Halep will still go into the U.S. Open later this month with the number one ranking. The Romanian dominated the first set, taking the final three games, but Bertens stormed back in the second, taking a 4-1 lead before Halep fought back to level and earned herself the match point in the tiebreak. But a Bertens crosscourt forehand forced an error wide from Halep, tying the breaker at 6-6. After Halep then netted a forehand at 7-6, Bertens won her third straight point to send the match into a decider. After the pair exchanged breaks to start the final set, Bertens claimed a third break of the set to lead 2-1, then blasted forehands beyond the reach of Halep to claim a decisive love break at 4-1.