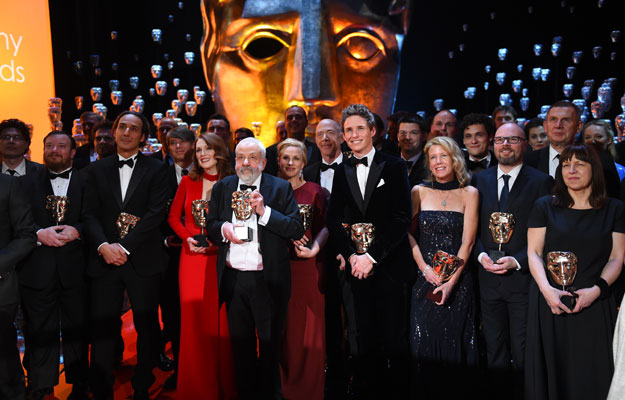 From a wheelchair-bound Stephen Hawking taking to the stage to an emotional tribute for late director Richard Attenborough, it was a memorable night at the BAFTA awards ceremony. Here are some of the highlights as up-and-coming actors joined Hollywood heavyweights for the event at London’s Royal Opera House. Award presenters this year included Hawking, the theoretical physicist suffering from motor neurone disease. As he took to the stage, Hawking received a standing ovation. He joked that he was not only more intelligent but also “better-looking” than the night’s host, comedian Stephen Fry. Best film: Boyhood The American coming-of-age drama “Boyhood”, which was filmed over the course of 12 years, won the British Academy BAFTA award for best film. Best animated film: The Lego Movie Best film not in the English language: Ida Best Documentary: Citizenfour Citizenfour — the film about US intelligence leaker Edward Snowden — won for best documentary but there was no-one to collect the award. Director Laura Poitras fears prosecution in Britain for revealing state secrets and currently lives in Berlin. Best director: Richard Linklater, Boyhood Outstanding British film: The Theory of Everything Best actor: Eddie Redmayne, The Theory of Everything British actor Eddie Redmayne, who scooped best actor for portraying Hawking, told AFP that he spent four months in a London clinic “trying to educate myself on the disease” and worked with a dancer to “find the specifics of Stephen’s physicality in my body”. Web Report