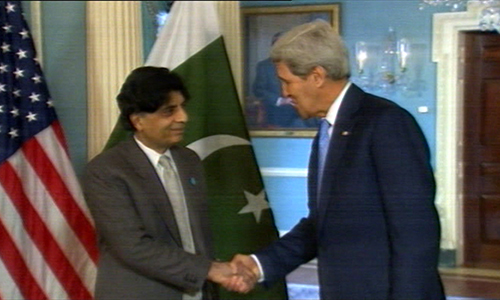 WASHINGTON – Interior Minister Chaudhry Nisar Ali Khan has said that an improvement in Pakistan-Afghanistan relations will be helpful in countering terrorism, 92 News reported. He was addressing a joint press conference with US Secretary of State John Kerry on Thursday. He said that relations between Pakistan and the US have improved due to the efforts of US Secretary of State John Kerry. John Kerry lauded the efforts made by Prime Minister Nawaz Sharif and General Raheel Sharif in the war against terrorism.