Biden's Iran approach praised as deft despite lack of progress 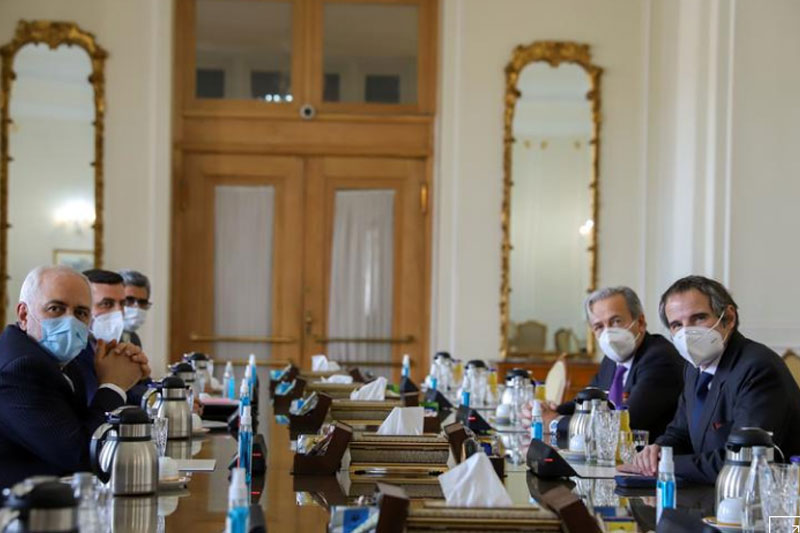 Biden's Iran approach praised as deft despite lack of progress

WASHINGTON/PARIS (Reuters) - U.S. President Joe Biden’s refusal to offer upfront sanctions relief to Iran may have angered Tehran’s clerical rulers but it has won some praise at home despite his failure so far to draw Iran into nuclear talks or deter attacks on U.S. forces in Iraq.

“Sensible,” said Elliott Abrams, former President Donald Trump’s special envoy for Iran, of Biden’s unwillingness to give Tehran sanctions relief before any talks on both sides resuming compliance with the 2015 Iran nuclear deal.

“Negotiation is always a give and take but we should not pay them just for the pleasure of their company at the negotiating table,” Abrams said.

Trump bequeathed Biden a nettlesome problem by abandoning the 2015 agreement that limited Iran’s nuclear program to make it harder to develop an atomic bomb - an ambition Tehran denies - in return for the lifting of sanctions.

The result is a diplomatic and military challenge as Biden seeks to revive and eventually broaden the pact to put greater limits on Iran’s nuclear program and its missile development, as well as constrain its regional activities.

That the Democratic president should be commended by a Republican official is striking given the chasm between the U.S. political parties and illustrates Biden’s balancing act as he tries to resuscitate the deal without being pilloried by U.S. conservatives.

Analysts described Biden’s approach to Iran as skillful in keeping the sanctions leverage he inherited from Trump and hence protecting himself from domestic criticism, while taking a harder line on rocket attacks by Iranian proxies in Iraq.

Washington launched air strikes on Iran-backed fighters in Syria on Feb. 25 in response to a Feb. 15 rocket attack on a base hosting U.S. troops in Erbil, Iraq, that killed a non-U.S. contractor and wounded American contractors and a U.S. service member.

U.S. defense officials told Reuters Biden approved the most limited option, saying he aimed to signal to Tehran that Washington would not accept U.S. citizens being killed or injured but also did not want a military escalation.

The defense officials said they did not expect rocket attacks on U.S. personnel in Iraq to stop after one strike in Syria, but said they aimed to set a marker that while diplomacy was the first choice, military tools were available.

While saying Biden had been deft in his early diplomacy and last week’s air strikes, former French ambassador to the United States Gerard Araud suggested the president’s team had made a virtue of necessity by rejecting Iran’s demands for immediate sanctions relief.

“They didn’t do it because they couldn’t do it domestically (and appear) to make this gift to the Iranians,” Araud said.

Clement Therme, an Iran expert at the European University Institute in Florence, Italy, said Biden avoided stirring up domestic opposition but that could not last forever.

“They are deft in the sense that they aren’t going to extinguish their political capital just after the elections to extend a hand to an Iranian government that’s been despised in the U.S. for the last 30 years,” he said.

Trump faulted the 2015 nuclear pact for failing to rein in Iran’s support for proxy forces, and he reimposed U.S. sanctions after withdrawing from the deal in 2018.

After waiting a year, Iran took its own steps to violate the deal by expanding its nuclear activities. Iranian-backed proxies also stepped up attacks during the summer of 2019, including on tankers in the Gulf and on Saudi Arabian oil infrastructure.

Tehran has denied being behind any of the attacks, whether those in Iraq, against shipping in the Gulf, or on Saudi installations by Yemen’s Iran-backed Houthis.

Senior Biden administration officials on Sunday said Iran had rebuffed their first overture - an offer of European Union-hosted talks between Iran and the six major powers in the deal: Britain, China, France, Germany, Russia and the United States.

U.S. officials responded with sangfroid, with one saying on Sunday: “We don’t think that this is the end of the road.”

A French diplomatic source said the Biden administration must avoid a “stop and go” situation where one president agrees to something, only to be reversed by their successor. That means winning Democratic and Republican support.

“It doesn’t have much choice but to expend political capital on this because in the campaign they talked about a return to (the 2015 deal) and a broader deal,” said the source.

“What needs to be built is a more consensual and bipartisan framework that survives a change in administration.”