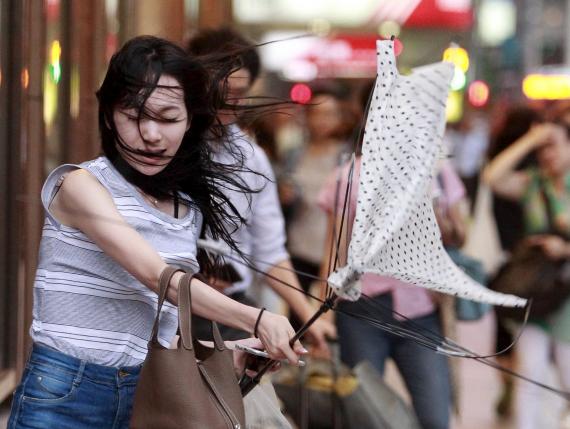 TAIPEI/YILAN - A powerful typhoon battered Taiwan with strong wind and torrential rain on Saturday, cutting power to 2 million households and killing at least two people, media and officials said. Typhoon Soudelor made landfall early in the morning on the island's east-coast counties of Yilan and Hualien, bringing up to 1,000 mm (39 inches) of rain in mountainous northeastern areas and wind gusting up to 200 kph (124 mph). "This is one of the worst typhoons I have ever seen," said a sewage station engineer surnamed Jiang, who was inspecting pumping stations early on Saturday. "My car was shaking when I was driving. There are too many trees down, and I even saw six downed power poles." Authorities issued flood and mudslide alerts and flying debris killed at least two people, media reported. In the capital, Taipei, large steel sheets and rods were blown off a half-constructed stadium and city authorities shut down some bus and subway services. Hundreds of people were evacuated as the storm approached over the Pacific Ocean on Friday and the island's military put tens of thousands of troops and thousands of vehicles on stand-by for rescue operations. The Tropical Storm risk website said the typhoon was a category 2 storm on Saturday, on a scale of 1 to 5, and could weaken to a category 1, as it leaves Taiwan later in the day. Taiwan's Central Weather Bureau said the typhoon was still packing winds of about 100 kph (62 mph) close to its centre on Saturday. Soudelour has drawn comparisons with 2009's Typhoon Morakot, which cut a wide path of destruction over southern Taiwan, leaving about 700 people dead or missing and causing $3 billion worth of damage. Soudelour is expected to leave Taiwan at around mid-day on Saturday, crossing the Taiwan Strait and hitting the Chinese province of Fujian, where the government has begun evacuating people who live on the coast. Typhoons are common at this time of year in the South China Sea and Pacific, picking up strength from warm waters before losing strength over land. -Reuters