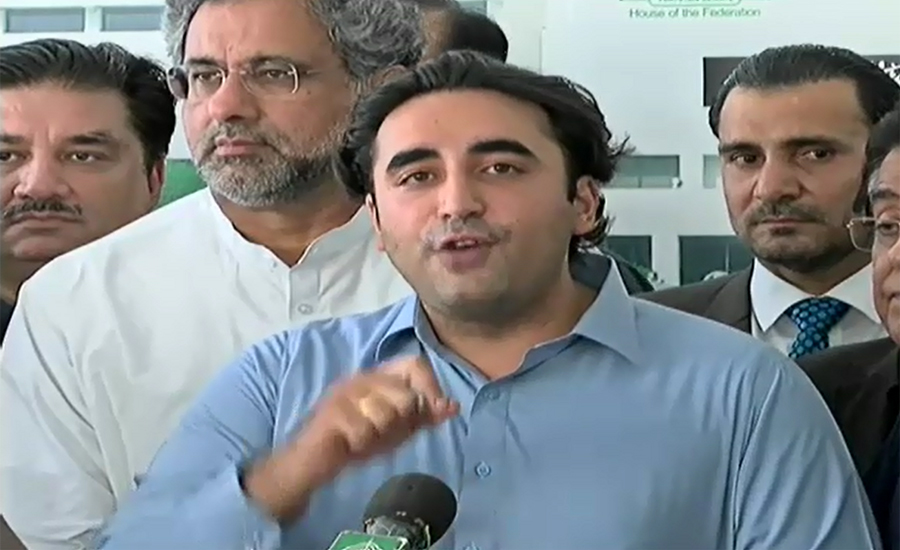 ISLAMABAD (92 News) – PPP chairman Bilawal Bhutto has once again demanded the production order for PTM MNA Ali Wazir and Mohsin Dawar. Talking to the media after the National Assembly session on Friday, he said that whatever occurred in the parliament today is not democracy, but a dictatorial method. He said that the remnants of Musharraf are adopting the traditions of Musharraf. “They want a selected opposition and a selected judiciary.” PML-N leader Shahid Khaqan Abbasi said that the government had established the worst example of pressurizing the judges. “Today target-killing of the judiciary is going on. References are being made in the darkness of night,” he said. He said that the opposition members are united against the government. “The problems are not being presented in the House,” he added. On May 29, PPP chairman Bilawal Bhutto has demanded that National Assembly Speaker Asad Qaisar should issue the production order for the detained MNA Ali Wazir. Talking to the media after appearing before the NAB, he said that the law and constitution were not followed in the arrest of Ali Wazir. Criticizing the government, he said that the NAB was being run under pressure. “PM Imran Khan is incapable of running the government,” he maintained. He also condemned the arrest and torture of the workers. “Our peaceful workers were attacked. Tear-gas and water cannons are not a new thing for us,” he said. The PPP chairman also announced to launch a protest movement against the government after Eidul Fitr. “We are taking to streets for the rights of the people, not to topple the government. The government would collapse under its own weight,” he said.