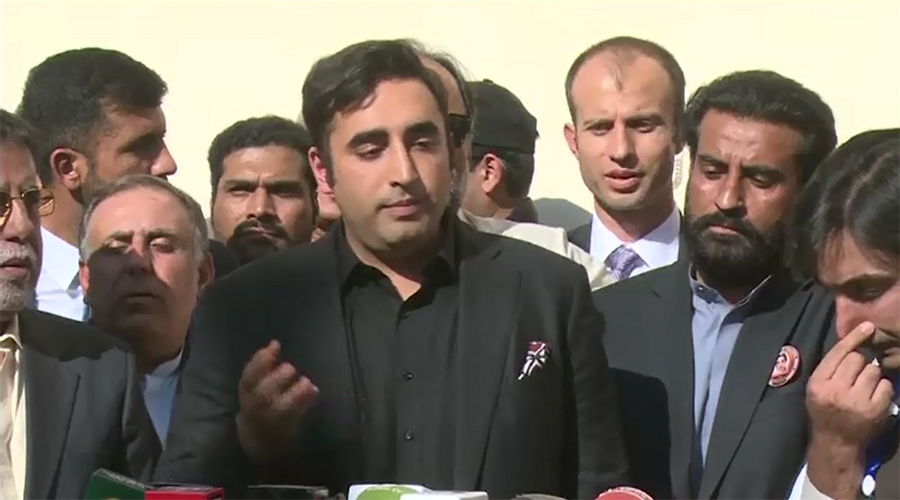 QUETTA (92 News) – Bilawal Bhutto fell into tears in Quetta on the memory of her late mother Benazir Bhutto. Talking to media after visiting the victims of Quetta Police Training Centre, Bilawal said that he will help the victims of PTC in every possible way through his personal capacity. “I came to Quetta for the first time, my wish has been fulfilled. The entire nation is ready to fight with terrorists then why are Nawaz Sharif and Imran Khan so reluctant? We don’t need Nawaz Sharif and Shareefistan to end terrorism. The entire country, including small provinces, would have to work together,” he said. He also announced to hold a public meeting at Punjab-Sindh border on Nov 4. He gave an ultimatum to government to accept four of his demands till Nov 7 otherwise PPP would begin long march from December 27. “If Nawaz Sharif does not accept our demands, we will begin a movement of elections before time,” he said. Those who cause loss to country are traitors, the rest are patriots but if someone talks against the thoughts of Nawaz Sharif and Ch Nisar, he is claimed to be a traitor. Dr Asim is a prisoner of Ch Nisar for one year, he added. “The culture of political revenge is on the rise in the country. Benazir Bhutto was martyred but her mission still continues. We are ready to fight against the attack on PTI’s youth convention but PPP won’t celebrate if the government is dismissed,” he said.