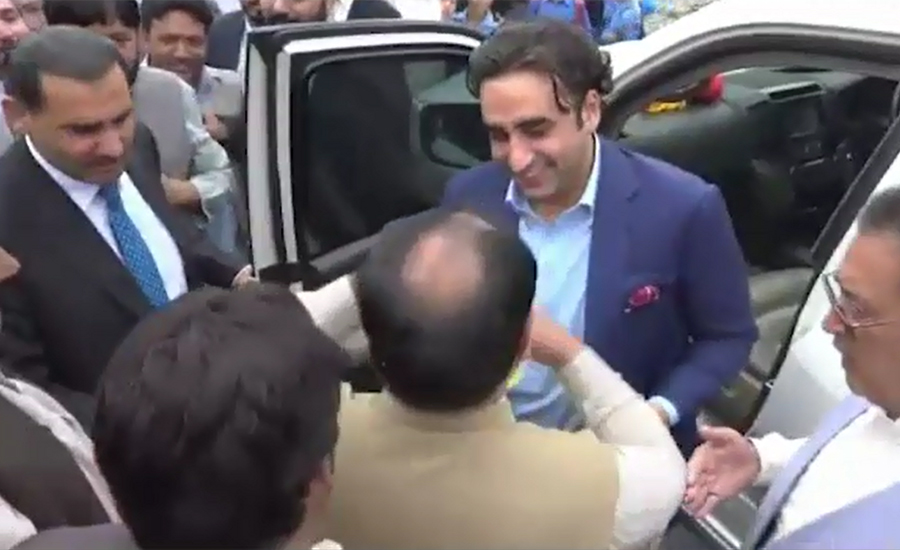 GILGIT-BALTISTAN (92 News) – PPP chairman Bilawal Bhutto Zardari said that his party will fulfill the promise made ZAB Bhutto regarding Kashmir. Talking to the media during his visit to Gilgit-Baltistan on Monday, he said that Indian Prime Minister Narendra Modi has the belief of Hindutva. “India has lost the war morally. A fascist cannot criticize another fascist. How can a person violating the human rights in his country talk about the violations of human rights in Occupied Kashmir?” he questioned. The PPP chairman said that PPP is the real voice of the Kashmiris. “I have come here to listen to the people of Gilgit-Baltistan. I want to seek their opinion on the problems of the country,” he said. He said that he believed the entire Gilgit-Baltistan would be with them if they started a long march against the government. Meanwhile, PPP chairman Bilawal Bhutto Zardari will address a workers convention in Astore on Agust 21. He will hold a meeting in Skardu on August 22 and in Ganchay on August 24.

Will have to take practical steps for Kashmiris: Bilawal

On August 13, PPP chairman Bilawal Bhutto has said that the government will have to take practical steps for Kashmiris. Talking to the media, the government’s acts show that it does not want solidarity. “We will tolerate all your incompetence, but will not compromise on the Kashmir issue. Modi has snatched the rights of the Kashmiris, but we will not let it happen.” The PPP chairman said: “Narendra Modi has made a historic attack on our Kashmir. We will fight a war for the Kashmiris if need be.” He said that the government should take the Kashmir cause seriously and play its rile to inculcate national unity among the people. He also criticized the government for shifting his ailing aunt Faryal Talpur to jail from hospital. “The government is targeting the women of its opponents as revenge.” Bilawal Bhutto said that a conspiracy was hatched in the Senate to pitch all political parties against each other. He announced that he would go to Skardu soon after Eid and launch a public contact campaign.

On August 12, PPP chairman Bilawal Bhutto said that India has robbed the Kashmiris of their basic rights, but the world is watching it indifferently. Addressing a gathering after the Eid prayers, he said that the Kashmiris are spending Eid in collective detention. “We will raise the voice of the Kashmiris at each forum,” he said. Bilawal Bhutto said that the hands of Indian Prime Minister Narendra Modi are red with the blood of the Muslims. “When good people do not do anything, then the evil dominate,” he added. He said that pellet guns are being used against innocent Kashmiris. “We will celebrate Eid while expressing solidarity with the Kashmiris,” he added. Criticizing the government, the PPP chairman said that the opposition leaders are being arrested when the government should give the message of unity.