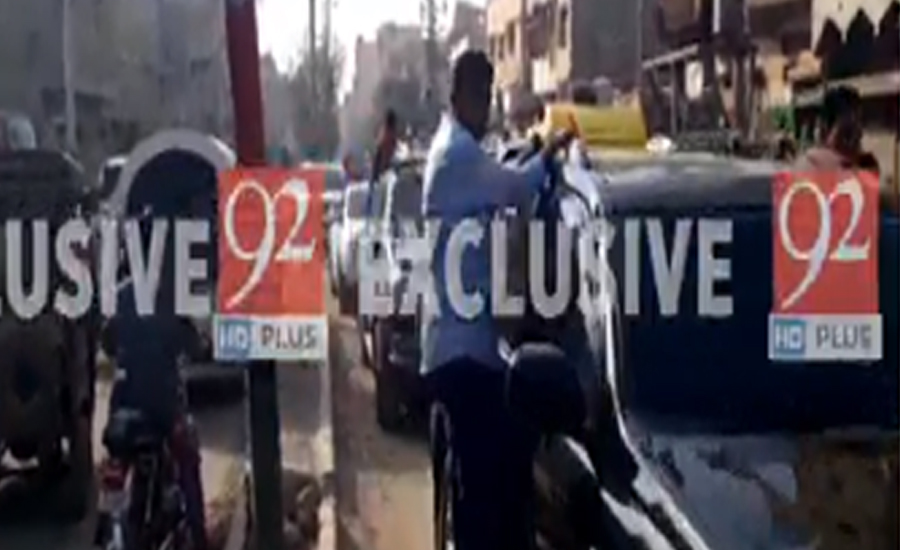 KARACHI (92 News) – Pakistan People's Party (PPP) Chairman Bilawal Bhutto Zardari’s convoy came under attack as disgruntled residents of Lyari’s Bihar Colony protestors pelted stones at his convoy on Sunday during his first rally of election campaign. As per details garnered, the protestor attacked with stones on the rally of election campaign near Agra Taj Colony, whereas the women and children come on the roof with pots and raised slogan "give water". The protesters pelted the convoy with stones, smashing windows of the vehicles. Bilawal’s convoy remains stuck in the area for half an hour as police and the PPP worker are unable to diffuse the situation. The route of the Bilawal's convoy was changed due to the angry protestors. Layari's PML-N candidate Saleem Raza has said that the people from Layari are deprived from basic facilities and needs of life even they have no water for daily use of life. He added that he condemned as a political activist for this type of protests. On the other hand, Bilawal Bhutto’s spokesperson, Mustafa Nawaz Khokhar, in a statement assured that the PPP election campaign will continue in Sindh. He requested party workers to remain peaceful saying the violence will not be responded to with violence. Khokar further asked the police and Ranger to ensure peace and also requested the Election Commission of Pakistan to take notice of the incident. Opposition Leader in Senate and PPP senior leader Sherry Rehman said that the PPP conducted peaceful rally but under a planned conspiracy, attempts are being made to make this rally as controversial. She said that the party will continue his political way, this type of acts could not stop the way. The rally is being diverted to other areas where PPP enjoys good support. Bilawal Bhutto is contesting from NA-246, Karachi. "This is my first election and I'm contesting my first election from #Lyari. People of Lyari always supported my mother Shaheed Mohtarma Benazir Bhutto and I know they will also support me. I will complete the mission of SMBB," he told his supporters during the visit.