LARKANA (92 News) – Pakistan People’s Party (PPP) train march led by party chairman Bilawal Bhutto Zardari has concluded after reaching Larkana in the wee hours of Thursday. Bilawal Bhutto Zardari led the march, titled ‘Karwan-e-Bhutto, which started Tuesday morning and reached Larkana after 42 hours. “We don’t want to topple the government. The next call we give will be for a long march,” Bilawal said after reaching Larkana. The PPP scion even criticised Imran Khan-led government. “The government has destroyed the houses of the poor people in the name of encroachment.” Even their shops have been demolished. “What sort of a government is this?” This government is the enemy of the people, he added. The NAB chairman said that the National Accountability Bureau (NAB) is a “black law” of former dictator General (r) Pervez Musharraf and if corruption is to be fought then a law will have to be introduced which should be free of political vendetta. He said that opposition parties are being targeted for political revenge. “We will not accept political engineering in the name of accountability.” Aleema Khan, Imran Khan’s sister, should give her sewing machine to us. This way the women in Sindh will be able to buy properties in the US too, he added. 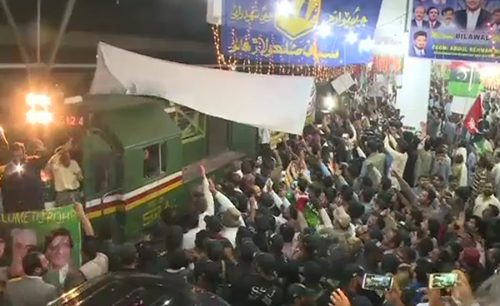 Lashing out at the present government, he said that those who promised to build five million houses for the poor people of the country have in fact deprived them of shelter. It is pertinent to mention here that the PPP chairman addressed the party workers at 25 railway stations during his journey from Karachi to Larkana. The train stopped at different stations such as Hyderabad, Tando Adam, Nawabshah, Padidan, Khairpur Mirs, Rohri among others. The PPP chairperson addressed workers at more than 25 different locations.

Women taken to station for Bilawal’s welcome on wages

On the other hand, it was revealed that the women were taken to the railways station on wages for welcoming Bilawal Bhutto. The women unveiled the truth. A viral video on social media, in which the women were complaining that they were promised to be given 2000 rupees but they were given only 200 rupees. The women claimed that landlord Anwar Joggi promised to give 2000 rupees for welcoming the PPP chairman on railway station. To a question by journalist, a woman said that he received only 200 rupees from the Balani Town chairman.