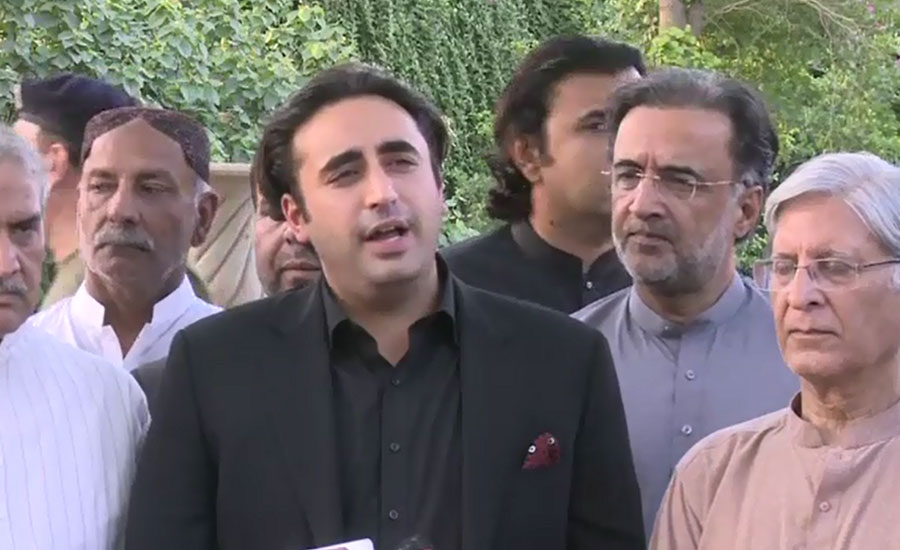 LAHORE (92 News) – Pakistan People’s Party Chairman Bilawal Bhutto on Sunday termed the federal budget of incumbent government as ‘economic suicide’. After a meeting with Pakistan Muslim League-N (PML-N) Vice President Maryam Nawaz at Jati Umra, while addressing a press conference, “The budget is so bad it is economic suicide [...] It is incumbent on us to stop this budget. If the government goes, let it. We gave them a chance to present a people-friendly budget. “We would have voted for such a budget but they presented an anti-people budget. PPP is left with no option. We will try our best to stop this in the parliament,” Bilawal said. He announced to initiate resistance movement against ‘anti-public budget’ present by the federal government. The PPP chairman claimed that they will not allow the government to pass the ‘anti-public budget’ at any cost. “I have held discussion over all matters with Maryam Nawaz. We have agreed for not letting the anti-public budget to get approved. PPP will continue its public contact campaign in order to highlight its message before the nation.” “Young leadership including Maryam Nawaz will have to play a long inning in future. Maryam Nawaz feels the pain of Punjab citizens and she should continue the struggle for her father Nawaz Sharif,” Bilawal mentioned. Lashing out at the budgetary decisions, the PPP chairman termed it as ‘PIMF’s [Pakistan International Monetary Fund] budget’. “We will contact coalition partners of the federal government, whereas, I will also meet [Jamiat Ulema-e-Islam Fazl chief] Maulana Fazlur Rehman in Islamabad.” “This is tantamount to economic suicide of Pakistan. We have responsibility to provide security to the poor segment and labourers,” Bilawal claimed. The PPP chairman announced to initiate anti-government movement from Nawabshah’s public gathering on the event of the birthday of slain Benazir Bhutto. “We [opposition] had provided a chance and now we are giving it again to the government. However, the budget must be public friendly.” He alleged that IMF is making decisions regarding Pakistan’s finance minister and FBR [Federal Board of Revenue] chairman. He continued that the resolution of national issues cannot be made solely by any political party and it needed joint efforts by all political parties of the country. The PPP chairman announced to initiate anti-government movement from Nawabshah’s public address on the event of the birthday of slain Benazir Bhutto. “We are always ready to hold dialogues for the resolution of public issues.”