Bilawal, Zardari decide not to appear before NAB today 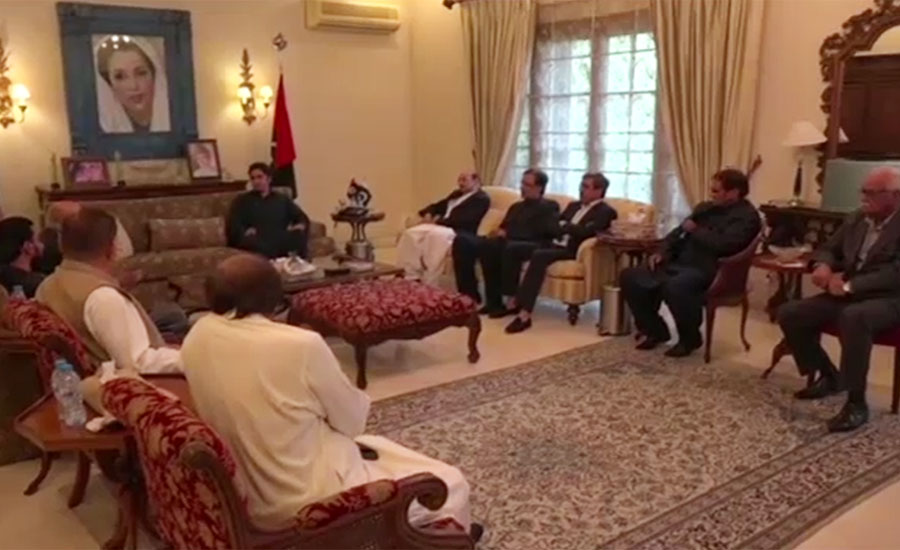 Bilawal, Zardari decide not to appear before NAB today

KARACHI (92 News) – Pakistan Peoples’ Party (PPP) Chairman Bilawal Bhutto Zardari and former president Asif Ali Zardari on Wednesday decided not to appear before the National Accountability Bureau (NAB). An important meeting of the party leadership was held in Karachi with Bilawal Bhutto Zardari in chair. PPP leaders Syed Khursheed Shah, Nayyer Bukhari, Qaim Ali Shah, Qamar Zaman Kaira, Makhdoom Ahmad and Nisar Ahmad Khuhro were also present in the meeting. The meeting also reviewed the arrangements of Benazir Bhutto’s death anniversary on December 27 at Garhi Khuda Bakhsh. Chairing a high-level meeting of PPP, Bilawal asked the PPP leaders to ensure the participation of activists across the country in the death anniversary of Benazir Bhutto. During the meeting, the decisions were made related to the actions of the NAB against the PPP. The meeting decided that Bilawal and Zardari would not appear before the NAB. The meeting also decided that the lawyers would appear before the NAB on behalf Asif Ali Zardari and Bilawal Bhutto Zardari. Sindh PPP Secretary General Waqar Mehdi said that the actions of NAB cannot put pressure on the PPP leadership. Meanwhile, Bilawal slammed the government for arresting PML-N Leaders Khawaja Saad Rafique and his brother Khawaja Salman Rafique and termed it political victimization. Earlier, the National Accountability Bureau (NAB) had summoned the PPP chairman and co-chairman on December 13. The notice had been sent in pursuance of a case regarding Park Lane Estates (Pvt) Limited, a Karachi-based real estate firm. Bilawal’s name is among the shareholders of the company. While confirming the report, senior party leader Farhatullah Babar said Bilawal received a notice from NAB Rawalpindi, however his legal counsel Farooq H Naek will appear before the anti-graft watchdog instead of the PPP chairman.