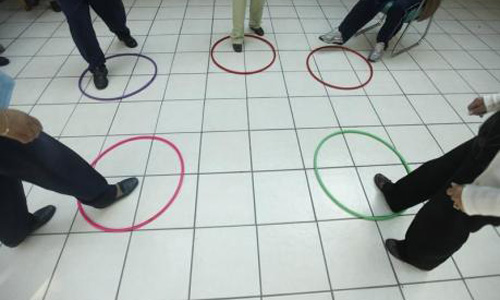 MASSACHUSETTS - An experimental drug from Biogen Idec Inc became the first Alzheimer's treatment to significantly slow cognitive decline and reduce what is believed to be brain-destroying plaque in patients with early and mild forms of the disease, according to a small study likely to reignite hopes of a treatment. Alzheimer's affects 15 million people worldwide, a number that is expected to grow to 75 million by 2030 without effective treatments, likely costing billions of dollars year. Any effective treatment is likely to become one of the world's most lucrative drugs, but the Biogen drug faces years of testing and would not reach the market much before 2020, even if all goes well, analysts said. Biogen shares were up 6.5 percent, or $27.97, at $461.92 in morning trading, after rising as high as $480.18. Biogen is entering a field littered with expensive failures from such drug makers as Pfizer Inc and Eli Lilly and Co. Lilly and Roche Holding AG are both conducting trials on drugs that work the same way as Biogen's, by blocking beta amyloid, a protein that forms toxic brain plaques that are theoretically an underlying cause of the degenerative brain disease. It marks the first time an experimental drug demonstrated a statistically significant reduction in amyloid plaque as well as a slowing of clinical impairment in patients with mild disease, said Alfred Sandrock, Biogen's chief medical officer. "It's a bigger treatment effect than we had hoped for," Sandrock said. The trial of the Biogen drug, aducanumab, tested 166 people divided into five groups, four of which each received a different dose, and a fifth that received a placebo. The Biogen treatment led to reductions in brain amyloid, according to interim data presented at a medical meeting in Nice, France, on Friday. The plaque reduction was more pronounced as the dose of the drug increased and over time. Biogen will begin enrolling patients later this year for a large Phase III trial, whose results could be used to seek approval of its drug. Lilly's solanezumab, a drug for patients with mild Alzheimer's, has been in late-stage trials since 2013, with results expected late in 2016, according to Sanford Bernstein analyst Tim Anderson. He said the Biogen late-stage trial would not wrap up until 2019. Evercore ISI analyst Mark Schoenebaum said by email, "The magnitude of the efficacy improvements is really striking." The trial had safety issues and drop outs, particularly by those on high doses, he said, and he wondered if some comparative success to Lilly may be related to trial design. Biogen said it increased its chances of success by carefully screening patients to exclude those with other forms of dementia misdiagnosed as Alzheimer's, and by testing only those early in the disease. "We imaged every patient coming into study, so we knew that every patient had Alzheimer's disease and plaque," Biogen Chief Executive George Scangos said in an interview. "It's hard to think of a reason why these data are not representative of the actual activity of the drug." HIGHER DOSES, GREATER EFFECT Safety and tolerability were considered acceptable, the company said. There was a big jump in the incidence of amyloid-related imaging abnormalities-edema (ARIA-E), or water surrounding brain tissue, at the two higher doses among patients with a gene associated with the highest risk for developing Alzheimer's. These highest-risk patients also dropped out of the trial at a higher rate. Most of the ARIA-E was asymptomatic or mild and resolved over time, Sandrock said. Using imaging to measure amyloid in six regions of the brain, researchers found plaque levels were virtually unchanged at 26 and 54 weeks into the study for the placebo group. Patients who received either 3 milligrams per kilogram of weight, 6 mg/kg or 10 mg/kg of aducanumab showed a significant and dose-dependent increase in plaque reduction at 26 weeks. There was an even greater reduction in plaque for patients at the 3 mg and 10 mg doses when they were tested at 54 weeks. Data for those in the 6 mg arm was not available at 54 weeks because that group started later. A fourth group of patients who received a 1 mg dose were not helped by the drug. The trial also used two measures to test cognition: a questionnaire with a 30-point scale to test mental acuity and an 18-point Clinical Dementia Rating scale that also tests for loss of ability to function. On the first test, placebo patients worsened by 3.14 points after one year versus significantly smaller declines for patients receiving aducanumab 3 mg and 10 mg, of 0.75 and 0.58 points, respectively. On the second scale, the placebo group worsened by 2.04 points at one year. While the scores were better for all the drug groups, only the 10 mg dose reached statistical significance, with a decline of 0.59 points. The 6 mg dose could still show a significant slowing on both scales when more data becomes available. - REUTERS