KUALA LUMPUR (Reuters) - Prized in China for its alleged health benefits for hundreds of years, nests made from swiftlets' saliva are being mixed into coffee and cereal as the Southeast Asian producers of the delicacy seek to broaden its appeal, and their profit margins. The nests are among the world's most expensive foods, selling for up to $2,500 a kg and the swiftlets that weave them are indigenous to Indonesia, Malaysia, Thailand and Vietnam. China consumes almost 90 percent of all bird's nests, traditionally eaten in soup, creating an industry that last year recorded $5 billion in sales and which executives expect to double by 2020. Companies such as Malaysia's Swiftlet Eco Park, one of the country's largest developers of swiftlet houses, want bigger gains by expanding their product line and market beyond China, where importers can often dictate the price. "Ask anybody in the industry where is your market and they'll say China and Hong Kong. Everybody is going there," said Group Managing Director Loke Yeu Loong. "We are looking at new markets, but if I sell raw bird's nest to Europe or India, they don't even know how to cook it." Swiftlet Eco makes coffee, skin care, puddings and candies with bird's nest. Loke declined to give specific sales figures but said the profit margin on some of these products was 10 times more than the raw nests. The company is also spending big on marketing bird's nest as a health food in the Middle East, Europe and the United States and plans to raise about $30 million through an initial public offering and New York listing in the third quarter of this year. Southeast Asian swiftlets' nests are particularly popular in the Lunar New Year festivities, which began in China last week, and are believed to be rich in nutrients that can help digestion, raise libido and improve the immune system. Malaysia is the world's largest producer of raw nests after Indonesia. Lee Kong Heng, president of the Malaysian Federation of Bird's Nest Traders Association, says marketing bird's nest as a supplement would attract younger, wealthier and more health-conscious consumers worldwide. Vietnam's largest birds' nest producer Yen Viet Joint Stock Co. is also keen to play up the benefits of the delicacy. The company makes cereals and porridge and is investing into scientific research in a bid to increase global sales, said Chief Executive Dang Pham Minh Loan. Malaysian bird's nest producers are well placed to market to the majority Muslim Middle East because the nests are halal, or a food permissible under Islam, Swiftlet Eco Park's Loke said. With more research, he hopes birds nest will become a global phenomenon. "We can conduct research and prove the benefit of consuming bird's nest scientifically," he said. 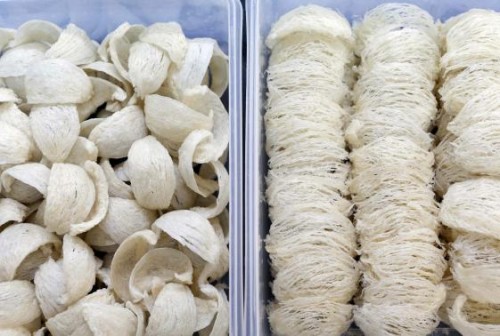