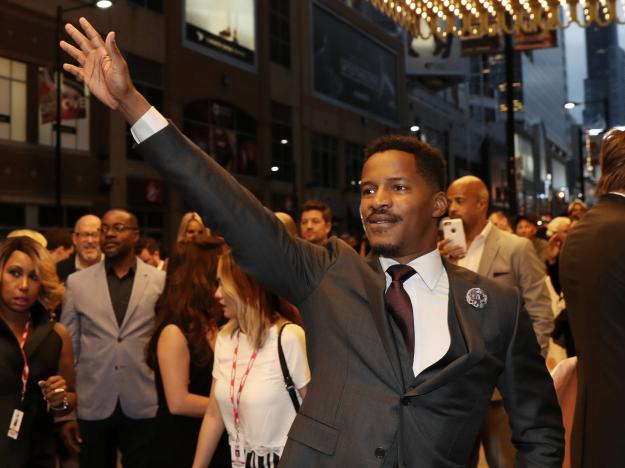 TORONTO - "The Birth of a Nation" director Nate Parker and his cast are playing challenging parts this weekend as they try to keep the spotlight trained on their acclaimed slavery drama while acknowledging concern about a rape case involving Parker. The day after "Birth of a Nation" received a standing ovation at the Toronto International Film Festival, the 36-year-old writer, director and lead actor didn't shy away from questions on Saturday about his 2001 trial and acquittal on rape charges that have dominated conversation around the film. But during a TV interview with Reuters, he swerved the conversation back to the film about slave preacher Nat Turner, who led a rebellion in Virginia in 1831, and his role in American history. "The reality is I've addressed this thing," Parker told Reuters. "Four hundred people worked on this film, maybe more ... this Nat Turner journey I think is so important because of what it can do for America." "I really wanted to say," he added, "'hey, this is about the film, let's keep it about the film, let's see what we can get from the film.'" The movie wowed audiences at the Sundance Film Festival in January, and was seen as a strong 2017 Oscar contender. But the controversy over the rape case has the potential to affect the film's marketing and jeopardize its awards season appeal. Fox Searchlight, the studio that bought the film for a Sundance record of $17.5 million, is a savvy awards season campaigner with a few recent best picture Oscars to its name. The film, out in U.S. theaters on October 7, debuted in Toronto on Friday night at a red carpet premiere, where no video cameras were allowed and security was tight around the venue. The event went off without a hitch and, for Parker, the standing ovation spoke to the film's resonance with audiences. "Birth of a Nation" cast members including Armie Hammer, Gabrielle Union and Aja Naomi King, who plays Nat Turner's wife Cherry, defended the film's message and historical importance. "It's definitely been very disturbing for me to say the least, but all I can hold onto right now is the power in this film and the part that I was able to play in it," King said when asked about the headlines around Parker's rape case. Union penned an op-ed in the Los Angeles Times earlier this month saying she could not take the Parker rape allegations lightly. She herself was raped 24 years ago, and now plays a woman in the film who was raped and wants to talk openly about sexual violence. "With my op-ed, I wanted everyone to know and to be very clear that as difficult and as hard and as awkward as these conversations are going to be, this has to be a part of the movement moving forward," she told Reuters. When asked about Union's op-ed, Parker said "Gabrielle's been a close friend and we talk all the time, all the time." -Reuters