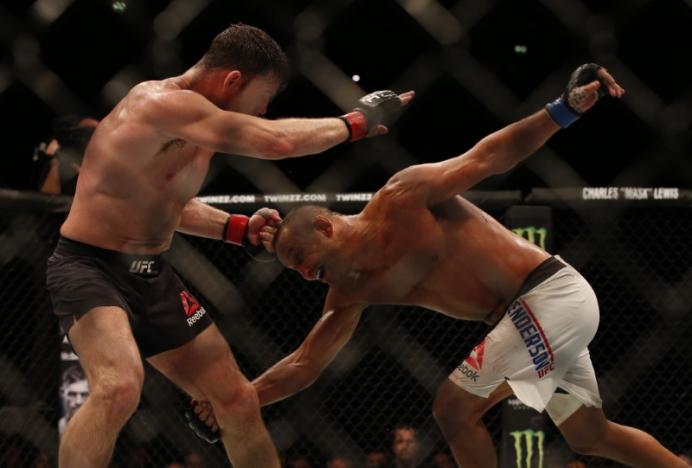 MANCHESTER Middleweight champion Michael Bisping finally avenged the most devastating loss of his career by claiming a close decision victory over Dan Henderson in a thrilling title fight at UFC 204 in Manchester. Hometown favourite Bisping finished the brutal five-round battle with his face swollen and bloodied after he flirted with disaster against his veteran American opponent before finally retaining the belt thanks to the judges scorecards. The 37-year-old won the title in sensational fashion in June, stepping up to fight Luke Rockhold at short notice at UFC 199 and knocking him out in the opening round to become the first British UFC champion. He immediately called out the 46-year-old Henderson, who knocked him out in 2009 in what he called "the worst knockout in UFC history", and despite his plans to retire, the former Olympic wrestler duly obliged. The fighters entered the octagon at 4:30 a.m. (0330 GMT) to cater for the American pay per view audience and after a cagey start, the fight exploded into life late in the first round Henderson floored Bisping with a thundering right hand but despite the American piling on the punishment, the champion was able to survive until the end of the round. Bisping ignored the blood streaming down his face and started the second by landing some stinging shots of his own, but with a little more than a minute to go, Henderson uncorked another right hand to floor the champion for a second time. Once again, Bisping held on grimly to the end of the round and with Henderson breathing heavily, the Briton bounced back to take the third round. Both men had their chances in the fourth and fifth rounds, but Bisping just about did enough to shade it on the scorecards. "This guy is incredible. At his age, he just kicked my ass. You've got to respect the guy he's a legend," a gracious but battered Bisping said in a post-bout interview after the decision was announced. For Henderson it was to be his last professional fight and while he will be remembered as a UFC great, he goes into retirement without ever having won a belt in mixed martial arts' largest and most prestigious circuit. "Fortunately for you guys, this is the last time that anyone will see me fight live," he said. "I appreciate all the support throughout the years, I gave my heart and soul to this sport, and fans like you... made it worthwhile." -Reuters