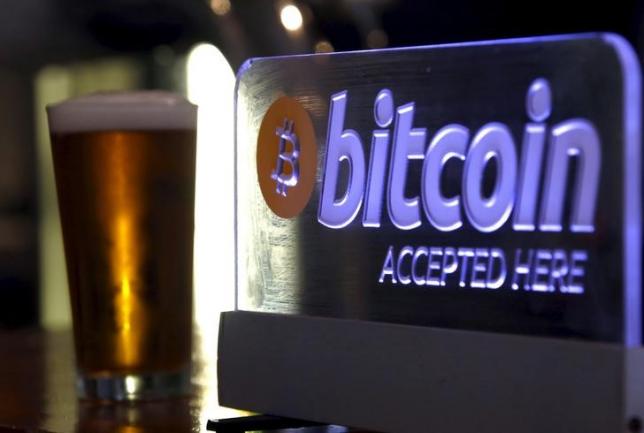 SYDNEY - Australian businesses are turning their backs on bitcoin, as signs grow that the cryptocurrency's mainstream appeal is fading. Concerns about bitcoin's potential crime links mean many businesses have stopped accepting it, a trend accelerated by Australian banks' move last month to close the accounts of 13 of the country's 17 bitcoin exchanges. The development is a blow to hopes of bitcoin fans that the currency can play a significant role in everyday business transactions in developed economies, with Australia once seen as one of its most promising markets. It is estimated to hold 7 percent of the currency's $3.5 billion global value, a sizeable figure in a country of just 24 million people. "We've got a squeaky clean reputation, and that's actually worth a lot more to us than dipping into this," said James Snodgrass, principal of Sydney's Forsyth Real Estate, which ditched the currency in late 2014 after the firm was investigated by the federal tax office. Forsyth had offered to collect home deposits and other realtor fees via bitcoin to cater to international buyers. The tax office probe found no wrongdoing but Forsyth was burned by the negative publicity and bailed out before ever taking a bitcoin payment. Although most mainstream banks in Europe and the U.S. already refuse to keep bitcoin-affiliated accounts, developments in Australia represent the first coordinated shutdown of bitcoin exchanges by a country's banking system. The move makes it much harder for people to convert regular currencies in to or out of bitcoin, threatening its long-term value. "It really runs on people using bitcoin, and if nobody uses it then it's worthless," said University of Technology Sydney senior finance lecturer Adrian Lee. BANK SHUTDOWN The banks' shutdown appears at odds with a government inquiry which in August recommended removing sales tax for people who buy bitcoin. The Australian anti-money laundering agency, AUSTRAC, told Reuters that banks have no legal obligation to close bitcoin accounts. The so-called "Big Four" banks - Commonwealth Bank of Australia, Westpac Banking Corp, Australia and New Zealand Banking Group and National Australia Bank - directed inquiries about bitcoin to the Australian Bankers' Association. Tony Pearson, the association's acting chief executive, wouldn't confirm the coordinated rejection of bitcoin but said in an email that its "lack of transparency and regulatory oversight raises a number of risks for users and also poses risks for the payments system, the integrity of the financial system and the erosion of the tax base". Australia's organized crime agency has said it is concerned the currency's untraceable nature makes it attractive for money laundering and selling illicit drugs. In the UK and the US, most large banks have already cut ties with bitcoin account holders, but lack of industry co-ordination has left room for individual lenders to support the currency, including Germany's Fidor Bank AG, which operates in Britain, and tech-focused Californian lender Silicon Valley Bank. CLOSE, MOVE OFFSHORE OR SNEAK AROUND The 13 Australian bitcoin exchanges whose accounts were closed by the banks have shut operations. The remaining four have had their accounts frozen, and now face three options: close, move overseas or spread their business into several smaller bank accounts to avoid detection by their banks. Buyabitcoin.com.au, one of the remaining four exchanges, said it is still considering its options. "It makes it, obviously, hard to take payments from our customers, but we have a couple of relationships left," said Andrew Smith, general manager of the Melbourne-based exchange. Smith declined to identify which bank his firm is now using from fear of repercussions but said he plans to move the business offshore. Two sources told Reuters that regional lender Bank of Queensland still held some bitcoin accounts. The bank said in an email that "virtual currencies fall outside of our risk appetite" but did not deny or confirm it had these accounts. RETAIL PULLOUT Some industry watchers believe ambivalence may be bitcoin's biggest problem. At least six Australian retail businesses, which as recently as 2014 courted publicity for offering sales by bitcoin, told Reuters they were considering exiting the currency. "If governments begin to aggressively attack the whole idea of cryptocurrencies and give it a bad name, it might have an adverse effect on our brand by accepting it," said David Brim, co-founder of off-road vehicle maker Tomcar Australia, which has sold one car using bitcoin since introducing it in November 2014. Grant Fairweather, owner of the Metropolitan Hotel in Sydney, said he started accepting bitcoin when a group of digital currency fans chose his pub as their regular meeting venue. "They tell me that it's doing quite well, but that doesn't transpose into here," said Fairweather, who sells about A$100 ($70) worth of drinks via bitcoin from the meetings and does no other bitcoin trade. An online clothing retailer told Reuters she had made no bitcoin sales since introducing the service in 2013 and asked not to be named, saying "since bitcoin's going out anyway, we'd rather not throw our name back into it". -Reuters